Hello!  Now that I’ve finished telling you about the first part of my trip (found here if you missed it), I am going to write my race recap.  This race was a lot different than my usual race since I knew that I would be walking the majority of the race.  I wasn’t very concerned about preparing or fueling, although in hind sight, I probably should have.  13.1 miles is still a long ways to go, even if you are walking!  Please don’t mind my blurry pictures in these KW updates as I was just learning to use my daughters GoPro.

The morning started around 5:00.  We had planned to be out of the hotel by 6:00 so that we could walk the .7 mile to the race start, which was scheduled to begin at 7:00.  We were frantically checking the weather.  The winds were very strong and it was raining.  There was a tornado warning until 8:00.  I am terrified of Mother Nature so I was freaking out a bit.  There was definitely part of me that wanted to back out and tell them to meet me afterwards.  But I didn’t travel all that way to sit it out!  So we all started getting ready.  As we were heading down to the lobby (coffee for them, soda for me), we got an update that the race was being postponed until 8:00.  We went back up to the room and spent some time looking at the video footage of yesterday’s jet skiing adventures to pass the time.

Around 7:00, we decided it was time to start walking to the start.  The winds were CRAZY and it was raining!  So we headed back to get jackets and umbrellas.

After checking their jackets and waiting in line for the port-a-pots, we were ready to go line up.

Sam and Ashlee jumped in with the 2:00 pace group and Crystal and I fell in towards the back.

Mile 1- 2: Crystal and I decided to run the first mile.  We knew the energy of the crowd would motivate us to run.  While we knew we wanted to walk most of the race, we figured the first mile would be a good one to run.  We were headed south on Duval Street when we hit mile marker 1.  We slowed down to a walk at this point and I decided it was time to come out of my jacket.  The wind was still strong, but the rain had stopped and I was very warm from the first mile.  The 2nd mile was down Duval Street and past the Southernmost Point.  Fun!! 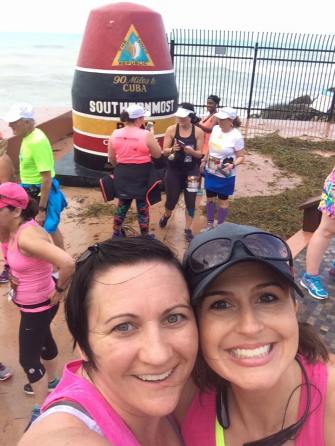 Miles 3-6: Miles 3-6 were also very scenic, as we walked along the sidewalk of Atlantic Blvd/Roosevelt Blvd.  We were frantically searching for Sam and Ashlee at this point along the course because we knew they would have reached the turn-around point and would be coming back.  We saw Sam around mile 4.5 for us (around 8 for her) and Ashlee around mile 5 (around 7.5 for her).  Sam told us that the wind SUCKS once you turn around.  We could definitely feel the wind, but it was at our backs helping us at that point.  We also passed a lot of seaweed on the course.  I suppose the Ocean was basically on the sidewalk that morning so it left a lot of the Ocean on the sidewalk, including Man O Wars.  I didn’t actually see any, but there were many people who did.  Ashlee actually stepped on one!  She is lucky she didn’t get stung! 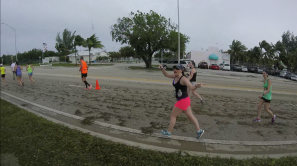 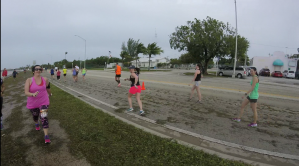 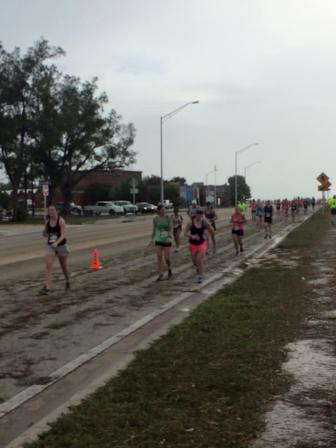 Miles 7-11: We reached the turn-around point at around mile 6.5 and headed straight back into the wind.  We decided to run another mile from 6-7, which was pretty tough for me.  The only (small) hill of the race was here!  It was a small hill, but enough to notice.  Between my injury, lack of training, the hill, and the weather conditions, I was happy to see mile 7 come and know I could walk again.  Thankfully, Crystal had brought some sport beans with her and offered me a few at this point.  I definitely needed some energy.  We headed back the same route we came, only this time we walked along the road instead of the sidewalk.  I was a little disappointed to see that the photographers were no longer on the course where we had seen them before.  Around mile 7.5, I started texting my family to give them an update of where I was.  I texted with them for about a half mile.  Texting on the course was definitely a first for me.  I did pull out my phone at Richmond when I was injured to update my mom, but having a full on conversation with my kids and husband was a little different.  When we were around mile 9, I got a text from Sam that she was done!  This really made me want to be at the finish line.  I definitely felt like we picked up the pace a bit at that point.  We were supposed to run an out-and-back loop down the White Street Pier, but due to the weather, that portion had to be cut from the course and they added an out and back down a side street later in the course to make up for the mileage.  Too bad…that would have been cool, but I totally understand their decision and I know that I didn’t want to be washed away! 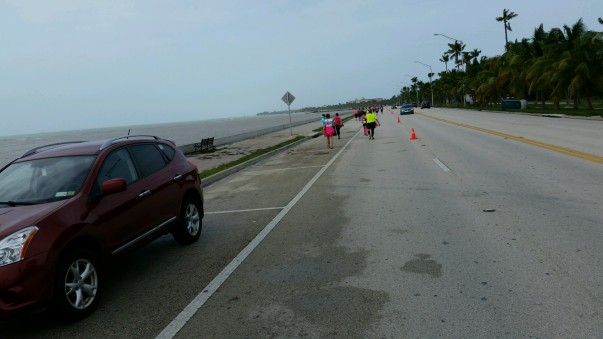 Miles 12 – 13.1: By this point of the course, I was pretty spent!  I didn’t want to be walking anymore!  I just wanted to be finished.  We passed the Southernmost point again and headed up Whitehead Street, which included the added out-and-back down a side street, which seemed to take forever.  Once we made it to the top of Whitehead Street, we were greeted with the most beautiful view of the day.  We reached Mallory Square and the turquoise water was BEAUTIFUL.  Unfortunately, I had somehow turned my GoPro off by this point so I didn’t get all the beautiful footage that I thought I was recording.  Bummer!!  At mile 12.5, we decided to run again.  It was getting a little difficult for me to figure out the course at this point as there were a couple of turns with no volunteers (just cones).  The race crowd had thinned dramatically and the tourists were out so I did wonder if I was going the right way a few times – lol!  We made our last turn and darted towards the finish line where Sam and Ashlee were waiting for us!!  I was so happy to cross that finish line!! 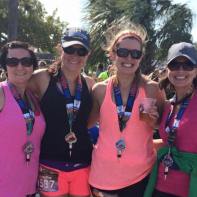 Post Race: After the race, I grabbed a beer that I ended up tossing (just wasn’t feeling it).  We caught the end of some raffle drawings, and Ashlee actually won the last prize of the day!!  She won a shirt and a gift certificate to get IV fluids and a vitamin shot.  Yes, that was actually the prize.

We had noticed at the expo that they had a booth where they were giving IV fluids.  I guess they figure in Key West, some people may be a little more dehydrated than usual 😉 After the raffle, we headed over to the pier to hang out in the sunshine for a bit.  The sun was shining brightly and it had turned into a gorgeous day!! 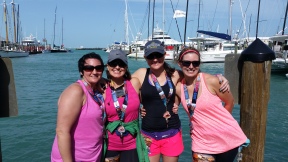 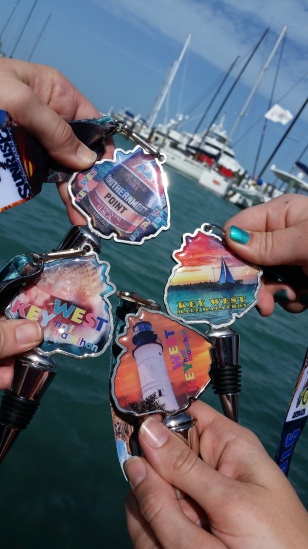 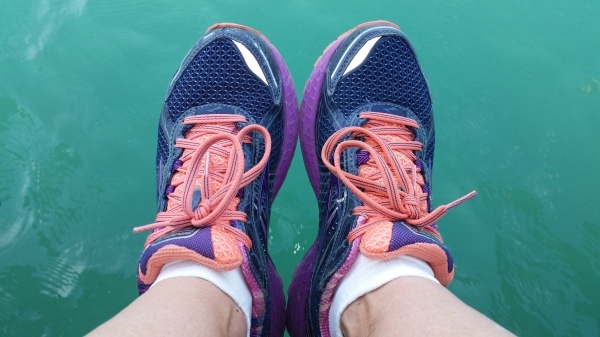 We went to the Half Shell Raw Bar for some lunch and a mimosa.  Afterwards, we made our way back to the hotel to relax for a while and then get ready for our pub crawl (stay tuned for that update).

My official race time was 3:15:48, which was a PR for my worst race time.  Even though having to walk was a hard pill to swallow when we had been planning for this race for 10 months, I would do it all over again in a heartbeat!  The entire weekend was so much fun.  This race also marks the 5th state I have ran in!

Here are my splits according to my Garmin (unofficial)

I would highly recommend adding this race to your bucket list!