One race I look forward to running each and every year is our local hospice race.  First and foremost, it’s a local race.  Easy to get to and I don’t have to wake up super early to attend.  Which also means more of my family (both blood family and running family) attend.  The registration fee is very reasonable and it benefits a wonderful cause, our local hospice (as the name implies).  Hospice has taken care of some of our beloved family members over the years and they are always terrific.  Also, the company I work for covers the race fee for any employees that choose to participate.  I really have no reason NOT to run this race each year.  They offer a 10k race, 5k race, and 5k walk so there is really something for everyone.  They also offer a TON of wonderful free food at the end.  Mission BBQ sandwiches, stuffed ham sandwiches, pasta, oranges, bagels, donuts.  Mmmmm.  This race was the first race I ever participated in back in 2011 and I have run it each year since then.  This also became the race that we run for Bubbies each year.  Sam had some shirts designed to honor him.  I love seeing the solidarity and support for him and his family.  I have raced the 5k solo, I have raced the 10k solo, and I have raced the 5k with Gabby.  This year I decided to race the 5k solo.  Makayla walked the 5k with Natalee and Natalee’s boyfriend.  Gabby usually runs, but she had a swim meet afterwards so I didn’t want her to be too tired.  Grammy (my mother-in-law) was looking for a walking buddy so it worked out perfectly for the two of them to walk together.  Steven had decided he didn’t want to run this year.  He said he was kind of tired of the hustle and bustle of races and he just wanted to be a spectator this year.  My mom, Becky (sister), and Jason (sister’s boyfriend) also ran the 5k.  Sam was also run/walking with Lilee and Kevin was running the 10k.  Another running friend, Ashlee also decided to register at the last minute.  We also saw our friends Sam N. (Or “boy Sam” as I call him) and Ky at the beginning of the race.

Leading up to race morning, the forecast was NOT looking good.  They were calling for temps in the low 40’s that felt in the 30’s, a frozen mix, and wind!!  What the What?!?  The weather is usually perfect for running in the beginning of April.  What is up with my bad weather luck lately?  On Friday night, I had to run out to the shed and take out some of my winter running clothes so that Makayla, Gabby, and myself had something warm to wear.  I got our race gear all set out and went to bed early.

I woke up around 6:30 and started getting myself together.  I gave Gabby the option to back out because I knew she was tired and still had to swim later in the day and I knew it was going to be cold.  She didn’t want to back out though.  Steven woke up and started thinking he might want to run.  He decided to pack a bag and bring it with him just in case.  Judi met us at the house and we left around 7:45.  I was kind of surprised that it wasn’t as cold as I had expected.  It was chilly, but the wind was calm and there was no precipitation falling from the sky.  I started to worry that I might be overdressed.

We made it to the race just after 8:00 (race begins at 8:30).  Steven headed into the drill hall to register and then went and changed into his running clothes (he packed shorts and 2 t-shirts, brrrr!).  The rest of us got our bibs on and headed over to take a group picture. 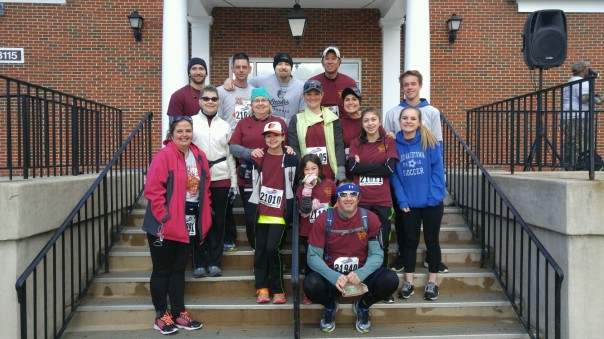 We had just enough time to spare to jump in line at the start.  Time to run!

The course starts with a slight hill before the 5k and 10k split.  I started running with Steven but he quickly went ahead of me.  I also saw Ky with his GoPro before the split.  Jason also passed me.  The 10k folks make a right and the 5k folks made a left.  I felt like I was running pretty fast and was trying to get into a groove.  I started warming up almost immediately.  My torso and arms were hot, but my hands were still a little cold.  The 5k course takes you through a residential neighborhood with some rolling hills.  There are 2 turn around points (U-turns), which make it fun to look for other people running.  I saw Jason, who was ahead of me a bit and then I saw Ashlee & her friend, Sam & Lilee, Becky, and I think I saw my mom from a distance.  I never did see Makayla & Natalee or Gabby & Grammy, but I found out later that Gabby & Grammy went on the 5k walk course, which is a different course (and included a big hill).  I was feeling pretty good until around mile 2.  I felt like I had started too fast and it was definitely catching up to me.  For most of the race, I smelled cotton candy.  The girl running near me must have had some kind of cotton candy scented lotion or perfume on and it was making me nauseous.  I tried to get away from her but we were running very similar paces.  I walked through the water stop, but just long enough to drink the water and then I picked it back up to a run. 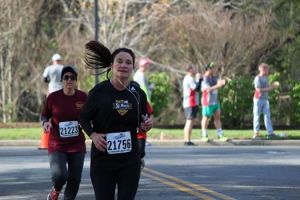 I really fought for that last mile.  Every step I took was difficult.  The sun was out strong by this point in the race.  I finally crossed that finish line!!

I thought I was going to be sick for a minute after crossing and just continued to walk for a minute before grabbing a water and heading over to see Jason.  We found a spot to cheer on the runners.  My official time was 30:10, which was a 9:43 pace and I came in 5th place in my age group!  I was happy with that, but a little disappointed because my Garmin watch was giving me even faster splits (It measured the course as 3.16, and gave me an average pace of 9:33).  I should know by now to never trust Map My Run or my Garmin watch completely.  It just seemed to be measuring right on track with the mile markers today so I thought it would have been pretty close.

Jason and I found a spot near the finish line to cheer everyone in.  I saw Ashlee and her friend finish first.  Up next was Sam and Lilee.  Lilee was very excited and finished strong. 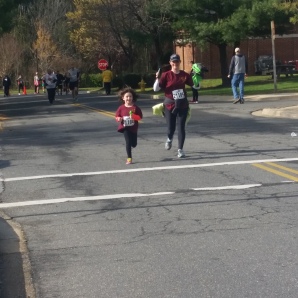 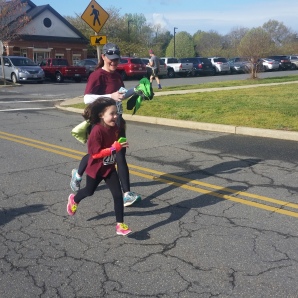 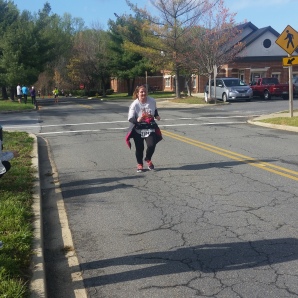 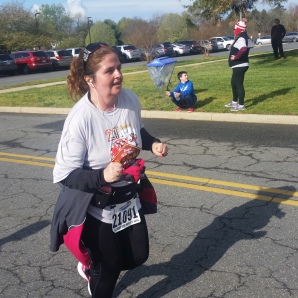 Then Makayla, Natalee, and Matt. 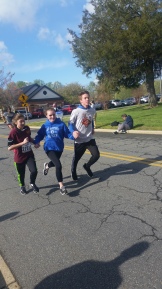 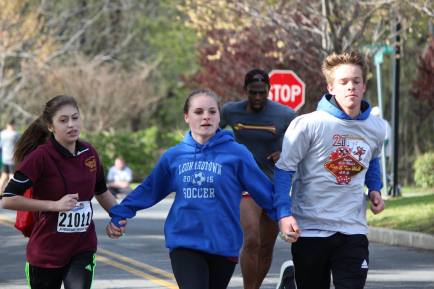 Then came the first 10k finisher from our group, Boy Sam!  He sure is fast! 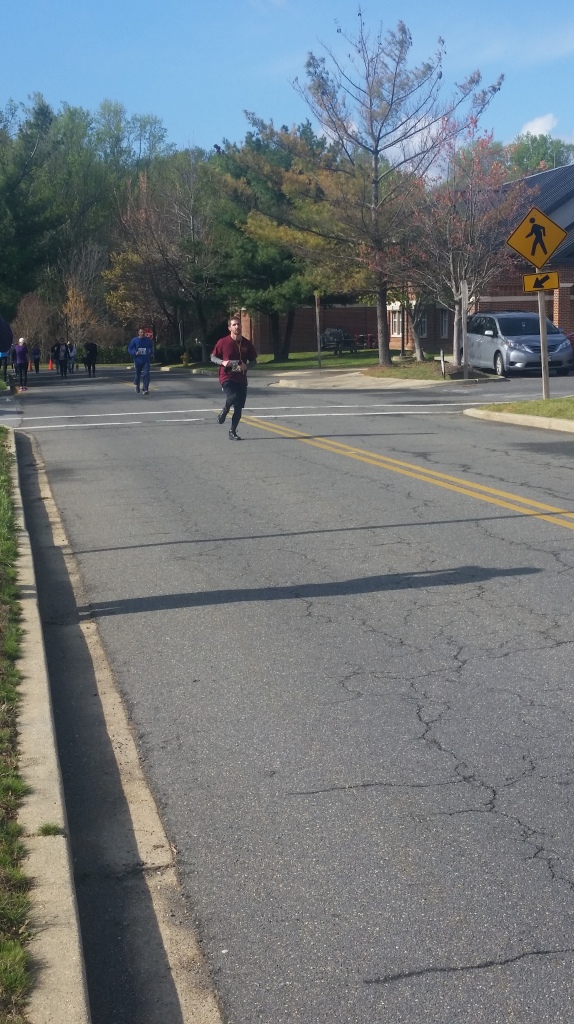 Up next was my mom. 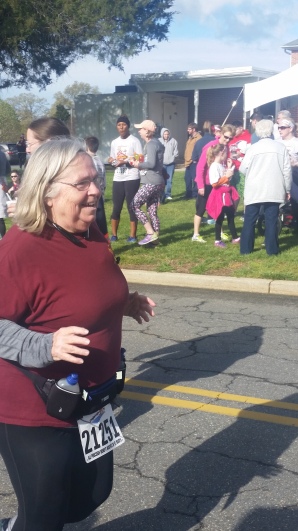 Then came Grammy and Gabby.  Gabby was pushing Grammy to run the last little bit and thought it was pretty funny! 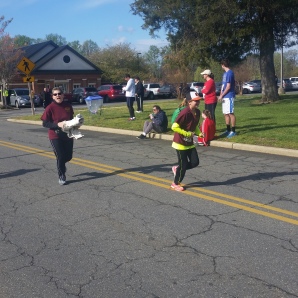 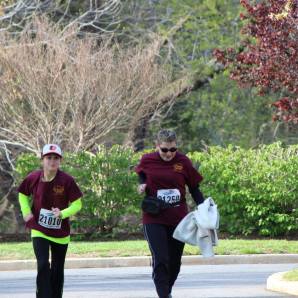 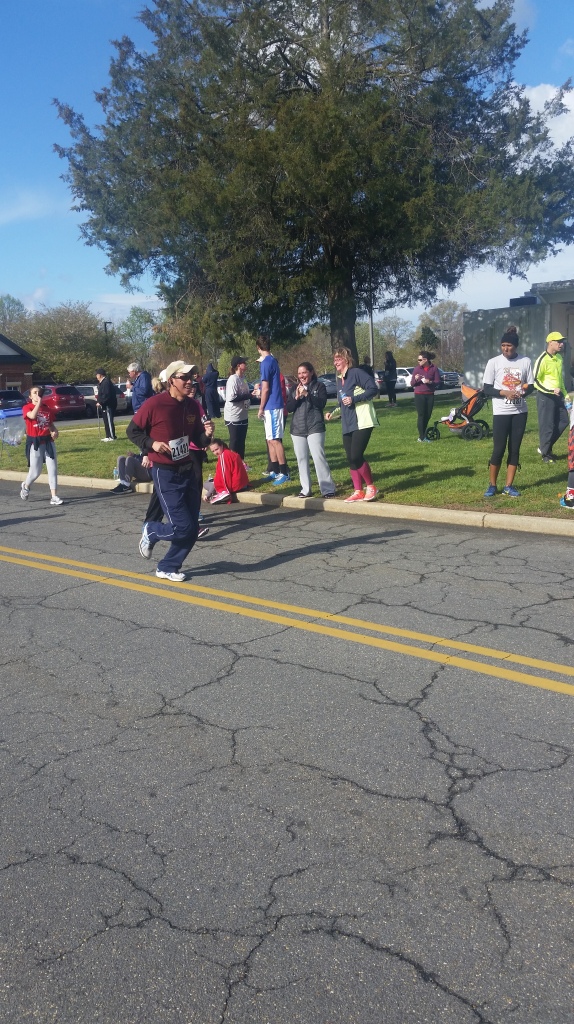 Shortly after him was Steven (10k)!  Looking strong at the finish! 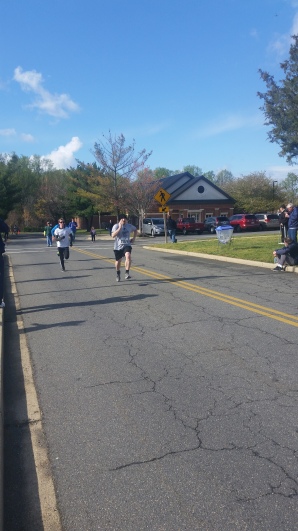 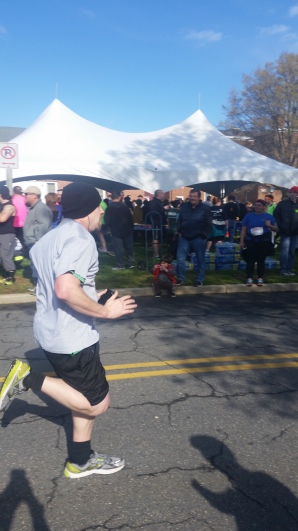 Then came Kevin (10k), who even did a leaping toe tap that I just barely missed with my camera. 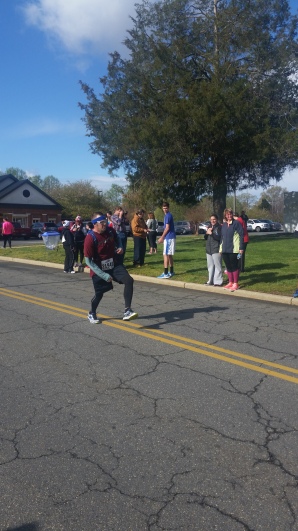 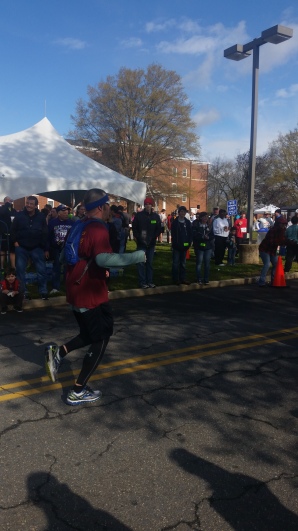 Those 10k runners were super fast this year!

The weather started changing really fast.  The wind picked up and it was pretty cold.  We managed to get a few pictures after the race, but not nearly as many as I would have liked. 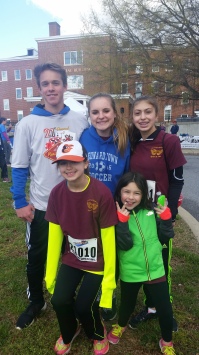 Even my father showed up to support us at the end of the race.  After getting a bit of food and chatting for a little bit, we were ready to get out of the cold.  We also knew we had to rush home to get ready for Gabby’s swim meet so we didn’t hang around long.  Unfortunately, we missed my mom getting her age group medal this year.  She came in 3rd in her age group!  Way to go Maw Maw!

We made it home just before the snow and serious wind started.  I’m so glad the bad weather held out in the morning.  It’s amazing how different the weather was at the beginning of the day versus the end of the day!

Below are my splits according to my Garmin Watch (keeping in mind that my official overall pace was a little different so these are probably slightly faster than my “real” pace).

Just for the record, here are my past hospice race results:

This is definitely a race that I look forward to running for many years to come!