Here we are again…back at Sunday. How did that happen so fast? Here is to hoping next week goes a little smoother than this week did as far as my workouts are concerned.

I ended up feeling really ill on Thursday. I had a massive headache to the point of feeling nauseous and was extremely tired. I somehow made it through the workday, but the evening was not as successful. I was hoping to take the kids to the Great Mills pool and get some laps in while they played. I even thought about how I could do pushups, triceps dips, squats, and lunges afterward. It became pretty obvious that this wasn’t going to happen when I got home from work and headed straight upstairs to lay down. I am glad I made that decision as I continued to feel worse as the night went on with a sore throat, earache, and neck stiffness. No fever though!

I didn’t feel much better by Friday and almost didn’t make it into work. Friday’s are a good day to get a lot done at work and I already had a couple of meetings scheduled so I decided to go in. My symptoms were more on again/off again for the remainder of the day. After running some errands and taking Makayla and Natalee to Sweet Frog (Gabby was at a play with her Grammy at the local high school), I headed home to figure out what (if any) workout I was going to do. I wanted to run 3.5 miles and the weather was very nice, but I just wasn’t sure I could make it. I finally decided to head to the gym and hit the treadmill so that I would have the option to hop off if I started feeling really bad. So around 8:30 or so, off I went. My head ached through the first 5 minutes, but then it went away and I felt okay for the rest of the workout. I watched another episode of Scandal on Netflix to help me through the miles.

On Saturday morning, Makayla headed off to Ocean City with one of her besties.  I’m going to miss that girl this week, but I hope she has a lot of fun!! I missed body pump on Saturday morning because we had Gabby’s invitational swim meet at St. Mary’s College!! This is the last meet of the summer swim session and all the swimmers on all of the teams are invited so it makes for a very long, but fun day. She was able to swim 5 individual events and 1 relay. Her first event was a relay and probably her most exciting event of the day to watch. She was the last swimmer in the water for her team and her team was in 2nd place when she dove in. The 1st place team had a pretty good lead on her. She swam her little heart out and came SOO close to coming in first. The other team just barely beat her team in the end, but it was so fun to watch and they came in 2nd place overall for that event. Next, she swam backstroke (her least favorite), then freestyle, IM, butterfly, and breast. She was having a bit of an off day with her times, but she still had a lot of fun and we really enjoyed watching her swim. She looks so graceful in the water. I’m still waiting on her final results from IM, butterfly, and breast. She will have her end of year party this week, where they will be given ribbons from the invitational for 1-12 place. I think she will earn a couple 🙂 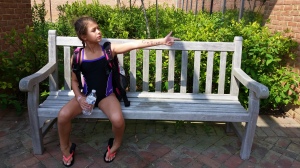 I had toyed with the idea of doing a twilight 5k up in Crystal City, but knew it would be a last minute decision after the invitational. We didn’t leave St. Mary’s college until 4:15, so I decided against the 5k. I was also still not feeling great. Better, but still very tired. We took Gabby out to dinner and then dessert and headed home for the evening. I decided to take it easy for the remainder of the night.

Sam and I had made plans to get up early and get our long run done. She wanted to shoot for 7:00. I told her I may not be up to that but would set my alarm and decide. Well…it didn’t happen!! I set my alarm for 6:15, but as soon as it went off I knew it wasn’t going to happen. Sam and I decided to shoot for 8:00, but the next time my alarm went off, I STILL wasn’t ready to get up. I ended up sleeping until 9:30!! I don’t even think I would have gotten up then if Steven hadn’t gotten up! I guess my body needed the rest!! Sam and I decided to postpone our run until the evening so the sun wouldn’t be as strong so I decided to have a lazy pool day!! I think it was just what I needed. I haven’t had much time this summer to relax at my pool and I thoroughly enjoyed it.  We decided to run at 7:30 and our training plan called for 5.5 miles tonight.  I had a feeling it was going to be a tough run, but I was pleasantly surprised with the way I was feeling during the run.  I think all that rest really did my body good this week.  Plus, I was so happy to have my running partner back that I chatted her up the whole time and it made the miles go by pretty fast for me.

I didn’t get all my workouts in as planned, but I did get all of my scheduled runs in.  Hopefully next week I can get back to my regular schedule.

Back in June, Sam sent out a challenge via Map My Run. It was a contest to see who could run the most miles between June 26 and July 25th. Steven, my mom, and I all accepted. Well, the contest ended Saturday and I have to give a huge CONGRATULATIONS to MY MOTHER for winning. Going into the challenge, my mom was the underdog. She was new to running and the 3 of us were not. She managed to log the most distance, coming in at 52.6 miles!! I missed one 4-miler this month the day after getting home from Myrtle Beach, and even if I would have ran that day, I STILL wouldn’t have beat her in the challenge.  So again, congratulations to you, mom!

And while I’m on the subject of Map My Run, I have to say I love the app and the opportunity it gives runners to be supportive of each other. It’s another reminder of how awesome the running community truly is!!