This weekend was a pretty productive weekend, but I just wish I could have ONE MORE DAY!!

Friday was my rest day.  And that’s all I have to say about that.

Saturday morning, I went to Body Pump.  I don’t know the name of the instructor; I think she only teaches occasionally on Saturdays, but I enjoyed her class.  Unfortunately, Sam wasn’t able to make it so I came very close to talking myself out of going.  Having a workout buddy makes such a big difference.  Its just not the same when you have to go solo.  But I got it done!  Afterwards, I came home to do some chores.  The biggest one being closing down the pool for the summer.  This is always such a depressing task.  We also got to watch a bit of our nieces softball game and I got some running around done.

While I was grocery shopping Saturday night, I got an excited phone call from my mom.  She had traveled to Fredericksburg to run a Glowstick 5k to benefit Wounded Warriors with my cousin.  She set a 5k PR and won 1st in her age group!  This from a lady who has asthma and had a partial knee replacement years ago.  And she is relatively new to running.  So huge congratulations to her!!

Only 2 weeks until the Crawlin’ Crab Shell Yeah Challenge!!  Which means, today our Sunday Run-day consisted of an 11 mile run.  We chose to run the loop on base again this week.  I felt pretty good about our run.   Especially the first 5 miles.  We took a restroom break when we reached the comfort station by one of the campsites (around 4.3 miles).  We decided to walk over to the water and take a couple of pictures afterwards so our GPS was a little messed up when we resumed Map My Run. 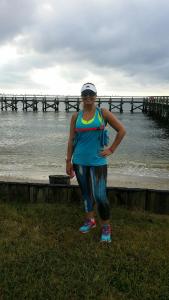 When we reached about 5 miles or so, we made a turn and were headed straight into the wind.  This is where things go pretty difficult for a mile or two.  It took a toll on us and we ended up walking around mile 7.5 for a little bit.  After that walk break, we were feeling much better.  The last mile was pretty difficult though.  We had already made the big loop and just needed to get one more mile in, but we kept changing our course because of hills/wind.  We just wanted to be done.  We ended up finishing with a couple laps around the drill hall, with one side being particularly tough due to the wind!  But we made it and we were so happy to be done! 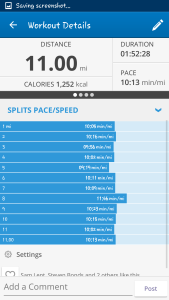 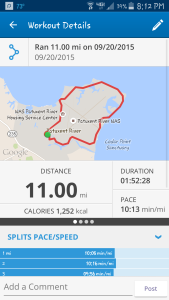 After getting home and getting cleaned up, I settled in for the Redskins game (woot woot – they got a win!!) with Steven and some of his friends.  I also decided to make a healthy Chicken & White Bean Chili Soup recipe that I found online.  I thought it was pretty tasty!

I found a few more healthy recipes that I am excited about trying.  Hopefully they go over well with the rest of the family.  I have not been making very healthy decisions lately when it comes to food and I have gotten away from logging my food in My Fitness Pal, so I’m going to try again this week.

I hope everyone has a great week!