I hope you enjoyed reading Part 1 and Part 2 of my Key West recap.  I will recap the rest of the weekend for you below!

After walking back to our hotel after the half marathon, we had some time before we had to start getting ready for our pub crawl.  We didn’t want to do anything too draining and decided a drink and a nap at the pool were the perfect answer!

We for a while (and were entertained by a drunken gal from a bridal party who kept telling us to get off our phones – lol!).  After a couple of hours, we decided to head back up to the room and order pizza and then start getting ready for the rest of the night.  Of course, we all had to wear our race shirts and medals!!   We met the tour guide around 8:00 and joined a group of others to start our walking pub crawl tour.  We were told to choose an alias so that we could identify ourselves as being on the pub crawl, but didn’t have to put our real names out there for everyone at the bars to see.  We decided that since there were 4 of us, we should be the Golden Girls!!  I got to be Rose 🙂 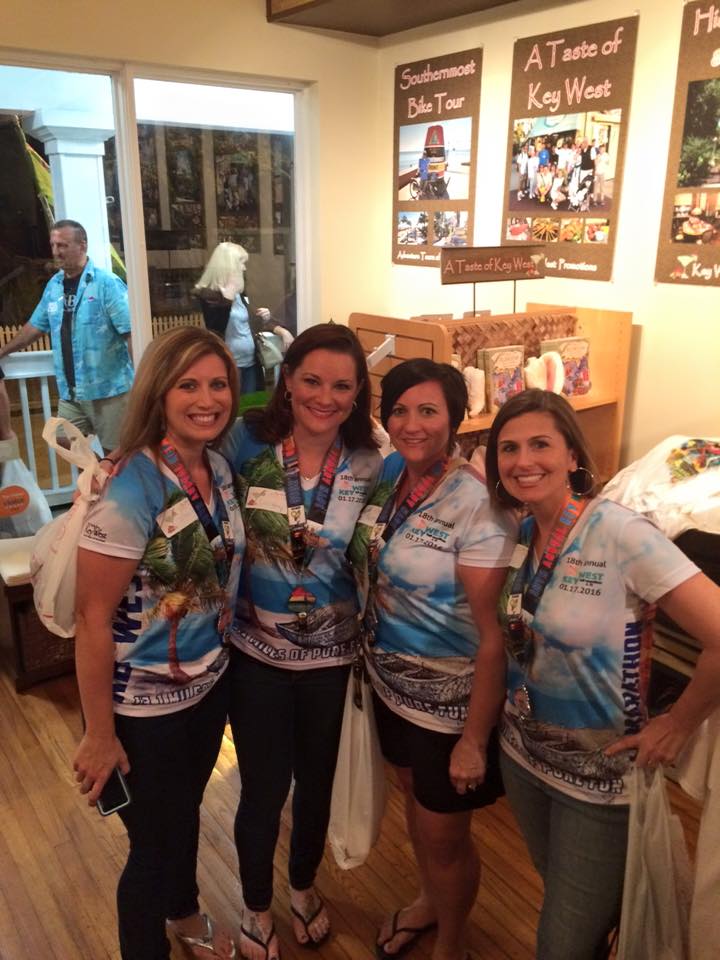 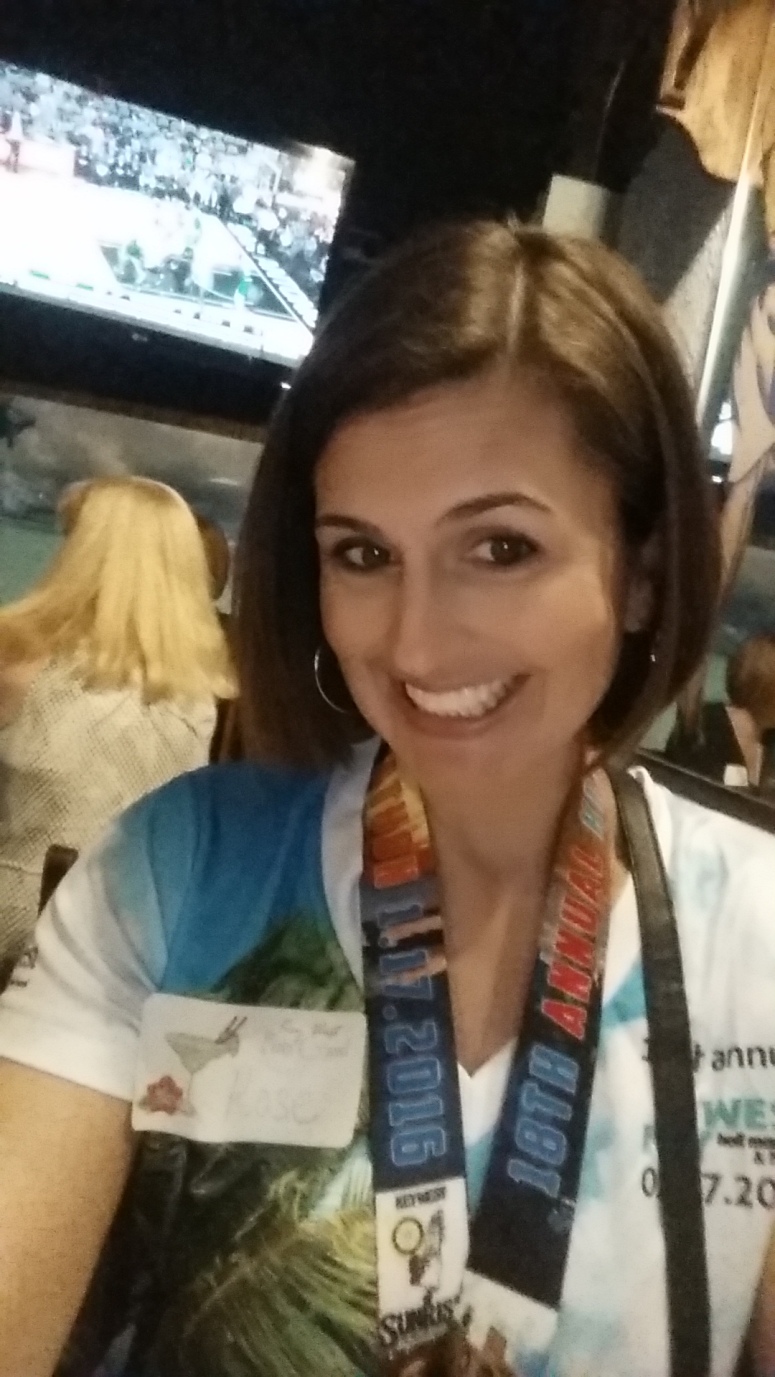 There was a couple on the tour who were from Calvert County!!  What are the odds?  We were surprised at how many Marylanders we ran into along this trip.  Anyway, I will just give a few highlights of the night and then let the pictures speak for themselves!! 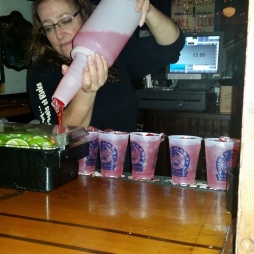 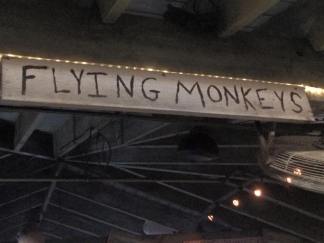 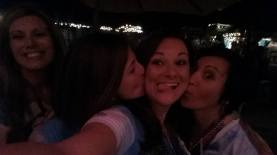 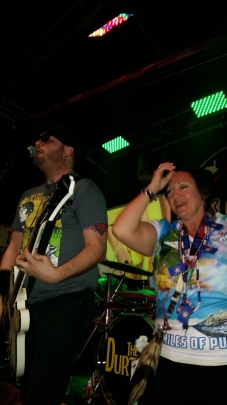 Other – Crystal won the Conch Blowing contest!!!  I don’t know what else to write about that so I’ll just post a photo ;o)

Also we hit up some other bars after our crawl was over and continued to have an amazing night!  Our stomachs were sore from laughing so hard!!!  I’d say we deserved it after all the hard work we put in that morning! 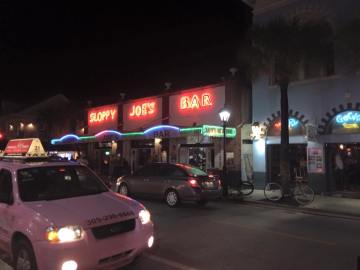 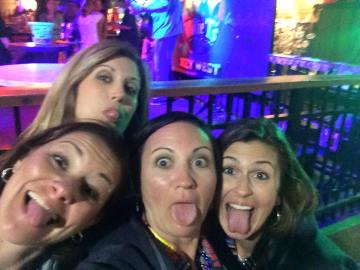 Oh yeah…I also noticed on the walk back to the hotel that my cork screw had fallen off of my medal.  I was trying to demonstrate to the girls that I had a weapon in case we encountered any psychopaths or perverts and when I went to reach for it, it wasn’t there!

We woke up surprisingly early on Monday and decided to rent bikes and head down to the Southernmost Café for breakfast.  It was a bit chilly so we wore our sweatshirts that Sam and Crystal talked us into buying the night before (Thank you Sam and Crystal). 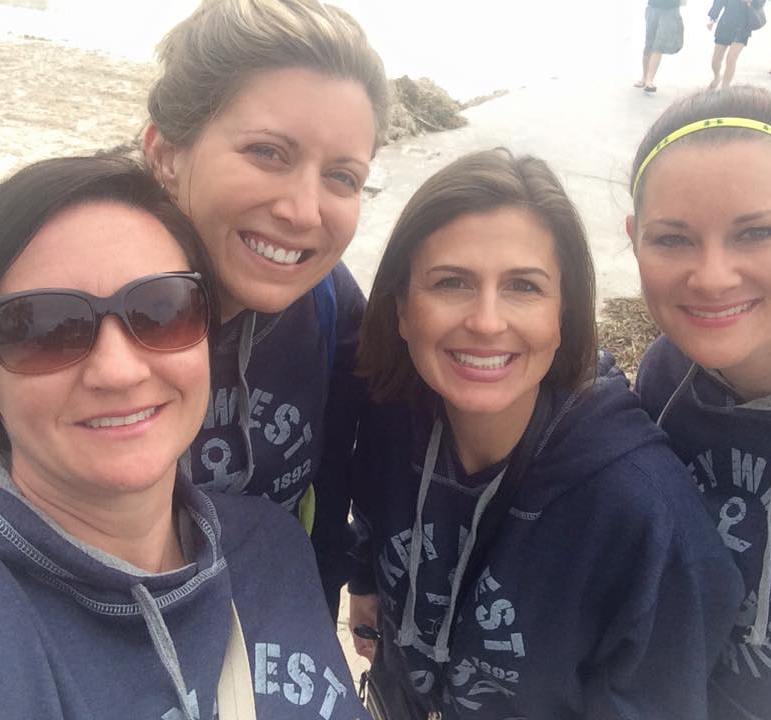 Breakfast was really good.  After breakfast, Crystal and Ashlee headed out to do some shopping while Sam and I headed out in the car.  Sam had broken her cell phone the night before so we drove out to Verizon to get her a new one.  We also got a “behind the scenes” peak at what goes on the day after a race when we had to stop by the “race house” (my official name for it) to get me a new corkscrew for my medal.  I had called that morning and was very pleased with how they handled the situation.  They gave me an address and told me I could stop by anytime to get a replacement.  We were in and out in 5 minutes.  They were still hard at work on cleaning tables, etc.  Everyone looked very busy.  After our road trip, Sam and I headed back out on bikes to do a little shopping.  We decided to head to Mallory Square to check out some of those shops and also got an ice cream for lunch!

Afterwards, we headed back to the hotel to meet up with Crystal and Ashlee for our final excursion.  We had a snorkel cruise scheduled for the afternoon.  I had called that morning to confirm because of the high winds.  I was assured that the winds had calmed down enough to allow for the cruise and that we were definitely on for that afternoon.  So, I was a little frustrated when we all showed up and were told 1) They didn’t have enough people signed up yet (they needed 10 and were still hopeful to get a few more) and that 2) It may be cancelled anyway because of the weather.  We were told if we wanted to cancel, we could because the snorkeling wouldn’t be good anyways and that it would just be more of a rum/reggae cruise without the snorkeling.  While we were deciding what to do, the excursion was cancelled.  I guess it made that decision easy and there was nothing we could do about it at that point.  We decided to head back to the room to get ready for dinner.  We stopped at the hotel pool for a bit to rest.  The nice bartender gave us each a free drink because he wasn’t feeling good and was going to be heading home early and didn’t want his sangria mix (he makes it at home every day) to go to waste.  Good deal!  After some pool time (in our hoodies) we headed to our room to get ready for the evening.  We decided to go to Mallory Square again. 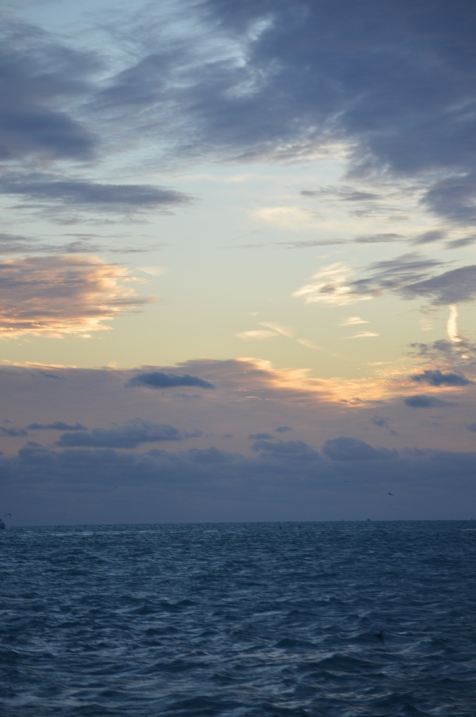 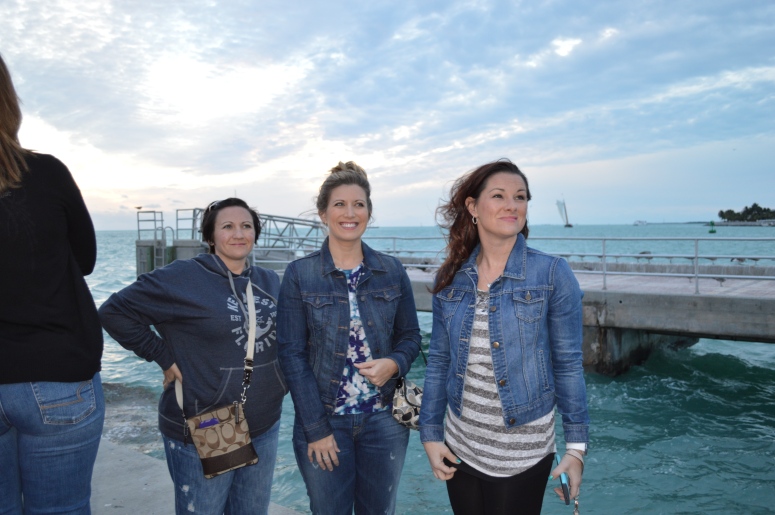 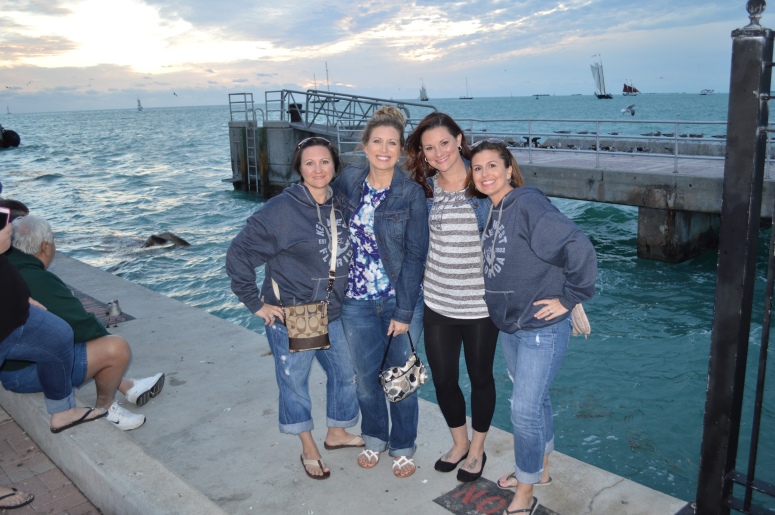 After getting some nice pictures at Mallory Square, we made our way to dinner.  Our last meal in Key West 😦

After dinner and doing a little shopping, we grabbed some Key Lime pie and headed back to the room to pack.

4:00 comes awfully early!!  Sam and I got ourselves together and headed back up to Ft. Lauderdale to catch our flight.  I was struggling to stay awake the ENTIRE time.  Thankfully, Sam really likes to drive because if I had to drive I don’t know if I would have gotten us there safely!  We got to the gate with a little time to kill and we decided to charge our phones and I decided to nap – lol.  I guess I didn’t “decide”, I just couldn’t stay awake and Sam happened to snap a photo. 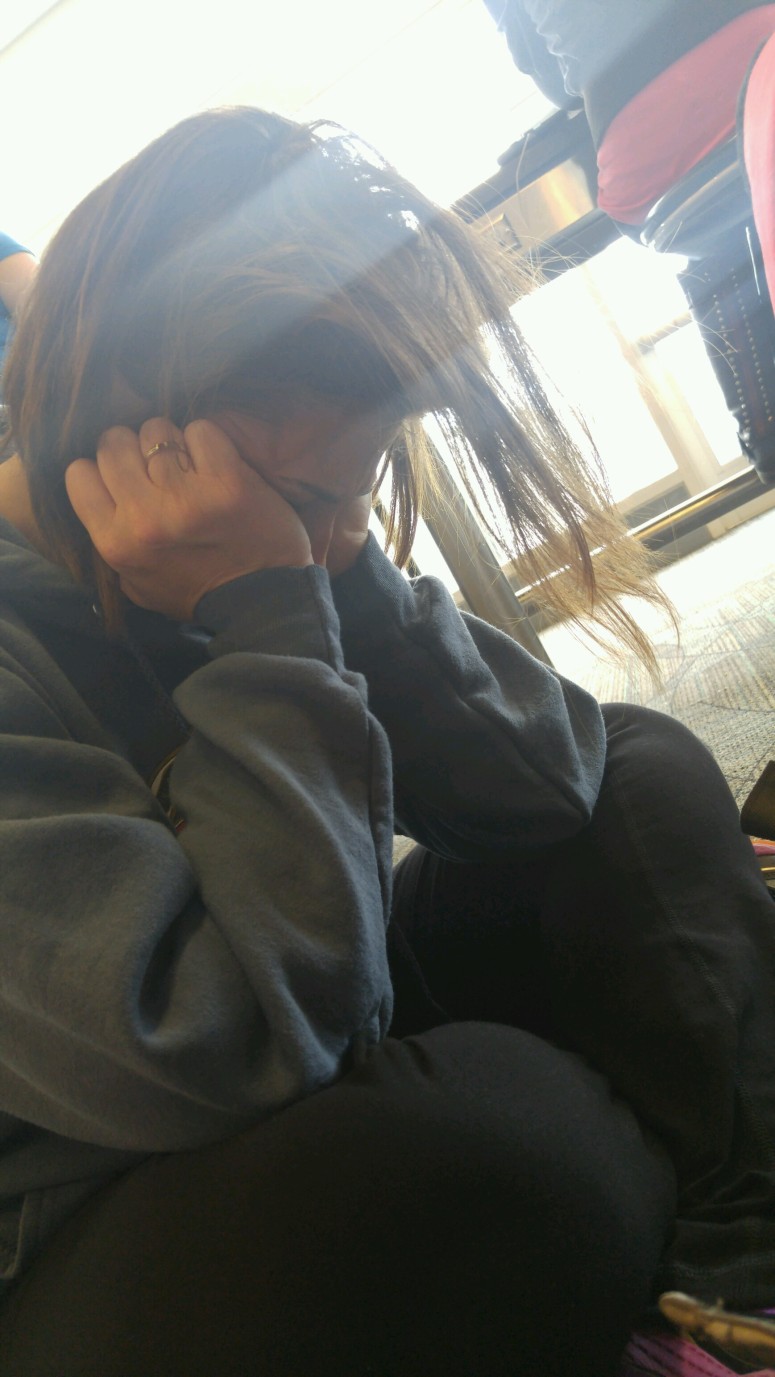 I slept a little on the plane, but spent most of the time organizing my photos and GoPro video.  Sam slept a good portion of the trip home, but unfortunately I didn’t snap a picture ;o)  We landed at BWI around 1:15 and it was FREEZING in Baltimore!!  Back to life, back to reality…

Key West was so much fun!! I would definitely recommend adding this to your bucket list if you are a runner.  If you are not a runner, I would still recommend adding a trip to Key West to your bucket list.  The girls and I decided that we should plan one destination race each year!!  I hope we follow through on that because it was SOOO much fun.  We are thinking New Orleans next February!!!

QOTD:  Where is your favorite vacation spot?