I was planning to run the Shamrock full marathon with Sam and Steven in Virginia Beach in March.  This race is significant because it falls on the date that Sam’s son passed away.  Kevin Arthur Lent passed away on March 20, 2013.  Kevin (or Bubbies, as we often called him) was very special to everyone who met him and he most definitely changed our lives for the better.  When Sam the date the marathon falls on this year, she knew she wanted to race it in his honor and I so badly wanted to complete it with her.  Steven is also on board.  They have been training and I am so proud of them!  This will be their first full marathon and it was supposed to be my 2nd.  Due to my injury, I am not going to be able to run the full marathon.  This makes me really sad, but I am glad that I will be able to participate (aiming to run the half marathon) and I will be there to cheer them on along their route and I will definitely be cheering them on at the finish.  I may not be fully trained come March, but I will do everything in my power to at least run/walk the race.

I’m a little behind on my updates since it took me so long to post my Key West recaps, so bear with me while I try to catch everyone up.  Since getting home from Key West, I had planned to get back into my regular running routine (Tues/Thurs short runs, Sunday longer run).  I went to physical therapy that Wednesday night and planned to start running Sunday.  Mother Nature had other plans and sent us a blizzard the weekend after we got back.  Although I didn’t get a run in, I still got some exercise in while playing in the snow with the girls.  We went from Beach Bunnies to Snow Bunnies in a week! 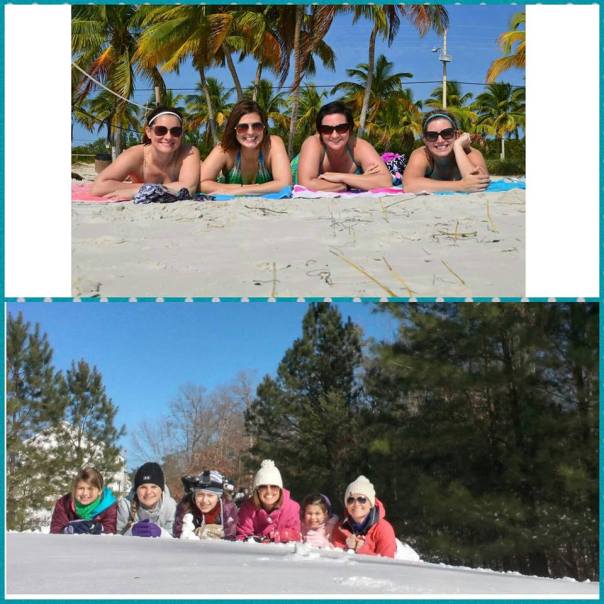 Monday night, I went back to yoga.  It felt good to get a good stretch!  Yoga is one of those classes that I always contemplate skipping, but yet I am always so happy that I went when it’s over.  It may be because it’s a late Monday night class and I just don’t really feel like leaving my house.  As usual, I was so glad I went.

Tuesday night, I went to the gym and ran 2 miles on the treadmill.  The 2 miles felt like an eternity, but I got them done. 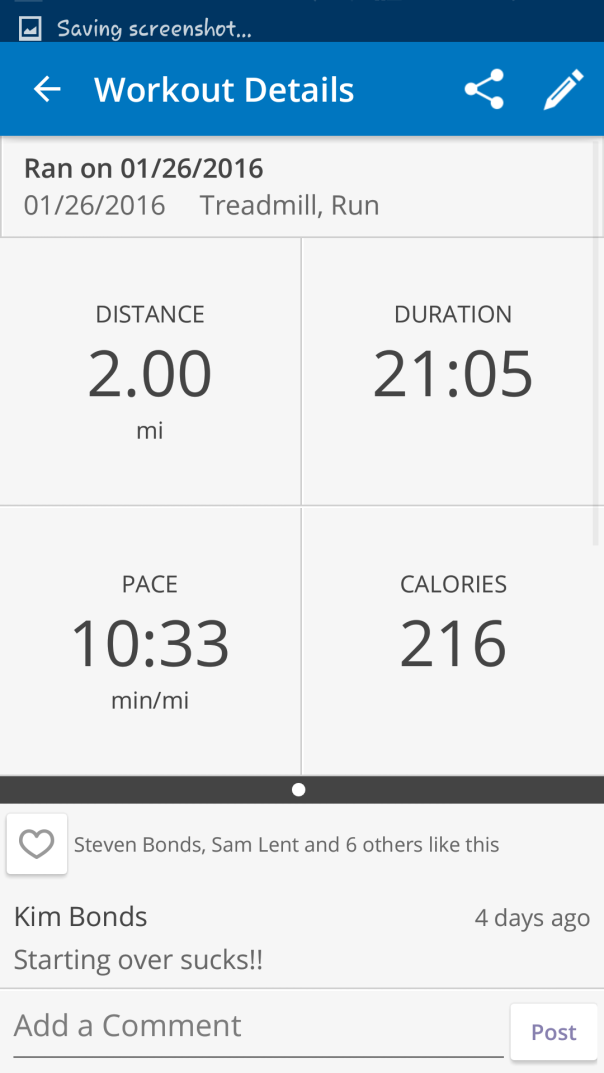 On Thursday night, Gabby had her band concert so I had to push my Thursday run to Friday.

On Friday morning, Steven and I went to the gym early.  He ran 3 miles and I ran 2.  I felt stronger than I did on Tuesday, but it was still a bit tough.  Lucky for me, I had a stud muffin on the treadmill next to me to keep me motivated ;o) 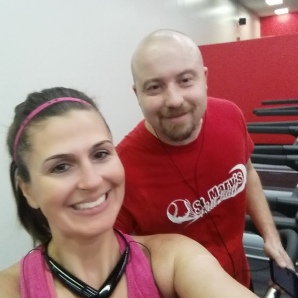 On Saturday, I took Gabby to her swim-a-thon at GMAC.  This girl impresses me so much!!  She swam 5000 yards (200 laps, almost 3 miles) to raise money for her swim club in under 2 hours.  The girl has so much drive.  She amazes me every day!! 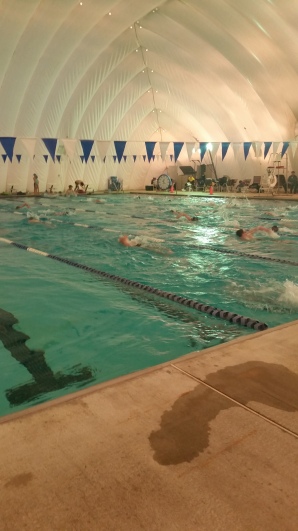 On Sunday morning, I met Crystal on base for my first outdoor run in quite some time.  We decided to try 3 slow miles!  It felt GREAT to be outside again!!  It reminded me of our old lunchtime runs.  We aren’t quite where we were back then and that last mile was especially tough, but we will get there!!! 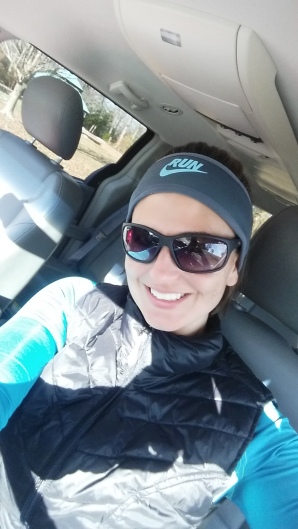 Sam and Steven also ran their long training run for the week.  They both had to run 16 miles!!  They were also running on base but started at different times.  After my run, I hoped in my van and headed to find Steven.  I had made him and Sam a sign on my way out the door that morning (used the back of a sign we had made for Gabby at her triathlon last year) so that I could cheer them on along their routes.  I spotted him around mile 6 or so and cheered for him and asked if he needed me to take anything.

He told me that he had ditched his hat on the route and told me where to find it so off I went to find his beanie.  After searching behind multiple electrical boxes, I finally found his hat and took it back to him (he said his ears were cold and he shouldn’t have ditched it so soon).  Then I went to find Sam on her route.  My only problem was that she hadn’t started yet!!  When I passed the drill hall, I saw that she was still sitting in her car.  I wanted to surprise her so I waited at the energy zone for her to start and cheered her along when she finally passed. 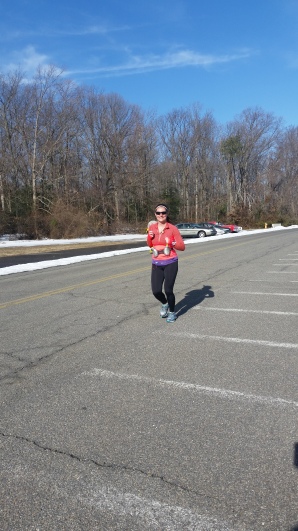 I would have liked to have cheered her on later in the race, but I was ready to get home and shower.  They both had amazing runs!!  Steven wasn’t thrilled when he got home.  He says his knees, ankles, foot, and toe hurts and it is not his idea of fun.  I am trying to encourage him.  Only a month and a half to go and he’ll never have to run a long run again!

I’m starting to feel like I’m getting settled into a good routine again.  This week has gone pretty well:

Monday – Sam and I went to yoga again 🙂 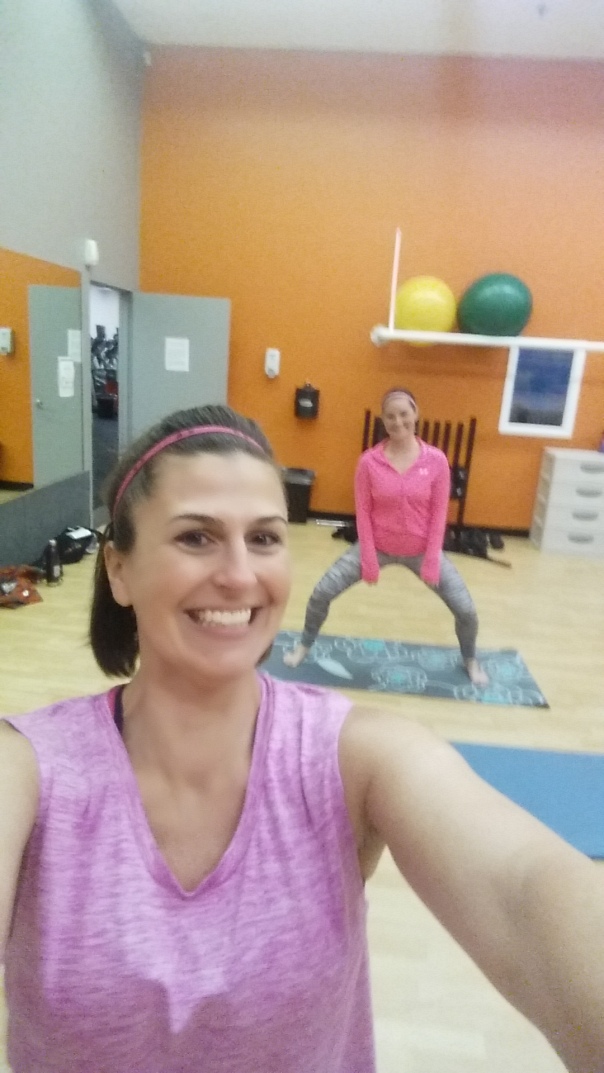 Tuesday – I ran 2 (lonely) miles during my lunch break.

I’m not sure what’s up with my map.  I didn’t run that route, but I did run 2 miles and the time was correct.  I hope to run 3 miles on Thursday and 4 miles on Sunday.  I also hope to get back to body pump soon.  It will be my first time since November so I know I’ll be sore for a week!

QOTD – Do you guys think Steven should continue training for the marathon?