One Shamrock race down, one (more difficult one) to go!!  We arrived in town yesterday evening and after hitting traffic and not getting into Va Beach until 6:00, we decided to hit the expo right away.  Sam had driven with us and Nat and Lilee drove with Kevin.  The expo was at the convention center again this year and we had no issues getting there.  We picked up our bibs (as well as Kevin and Lilee’s since they were still stuck in traffic) and our shirts. 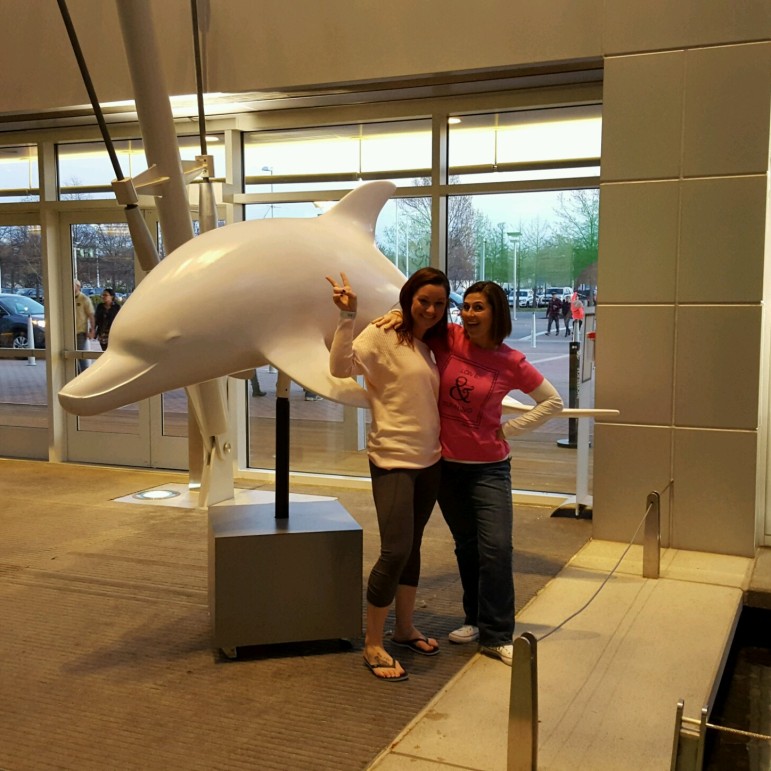 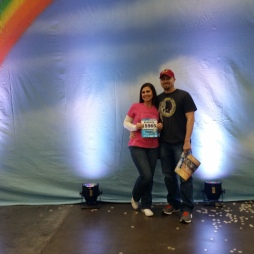 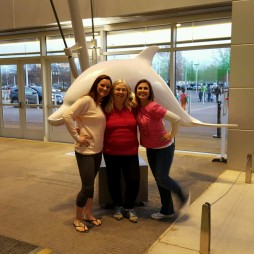 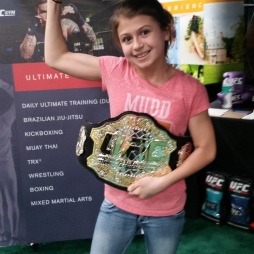 We walked around the expo for a while, but I didn’t really see anything that I had to have.  We did buy Steven a 26.2 magnet and we picked up a couple of stickers for Gabby.  After the expo, we headed over to Subway to have some dinner.  Kevin, Nat, and Lilee met us there right as we were finishing our food.

This is where things got interesting.  I can’t even think about it without laughing.  We left Subway and as we were walking to our van, we saw a tow truck.  The drivers asked us if any of the cars were ours.  We told them that the van is ours, but the others weren’t.  So, we got in the van and we were watching them put the boot on this silver car and back it up.  We were all talking about how there weren’t any signs on the fence and how it “must be a repo”, etc.  We were joking and laughing about it, when all of a sudden, Sam recognizes the sticker and goes “Wait, is that Kevin’s car?”  She jumps out and we all quickly realize it is his car (he always had a truck until recently and I still can’t get used to him driving a sedan).  I yelled for Steven to call Kevin and we stayed in the car.  I’m thinking its all under control until I hear Sams voice start to get LOUD.  So, of course I had to jump out of the van to provide back-up!!  Lol!  I jump out and I’m yelling “Show me the sign, show me the sign”.  Meanwhile they are telling Sam to move (they were still in the process of getting his car on the tow truck) and she was yelling “I’m not moving”!!  Steven was on the phone with Kevin (who was still in Subway with Nat and Lilee, right around the corner) and of course Kevin initially thought Steven was punking him!  So, Kevin comes running around the corner.  At this point the one dude is showing Steven and me the (unlit) sign at the entrance by the fence that shows that it’s parking for one of the hotels.  He seems pretty calm and is telling us “out of towners” that we need to be really careful about where we park so I figured at this point they were going to let us go.  Thankfully, they did!  Shewwww!  Thank goodness Sam realized it was Kevin’s car at the last minute.  We were getting ready to watch it get towed away!  And he had only been in Subway for 10 minutes, tops.  After the fact, it was pretty funny though!  Makayla and Gabby thought it was hilarious and were laughing at how Sam and I went from being “pretty little flipping dolphins” (what Steven calls us when we are all excited about running) to being ready to fight tow truck drivers.  Tehe.  I can only imagine what the tow truck drivers were thinking about us.  One minute we were telling them its not our car and the next we are ready to fight them over it.  Bwahahaha.  Its probably not as funny to anyone else, but we sure had some laughs over it.

So anyway, we were pretty amped up after that.  We went to the grocery store and got our yogurt/bananas/water and then we dropped Sam off at her hotel and headed to ours to get all checked in.  We got checked in and made our flat race people. 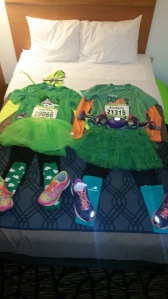 Gabby continued working on her signs and we finally all got to bed.  I had trouble falling asleep, but slept okay (not great) once I fell asleep.

I set my alarm for 5:45 Saturday morning and actually got up around 6:00.  My mom, Gabby, and I all got ready for the 8k while we let Steven and Makayla sleep in. 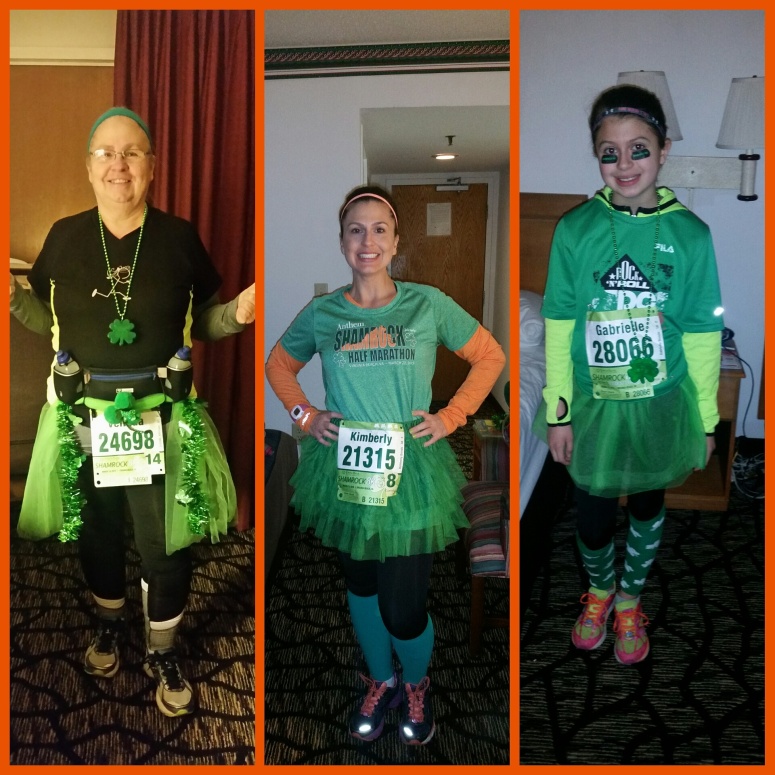 We all got ready and then headed out around 6:45 to a beautiful sunrise!!  So pretty! 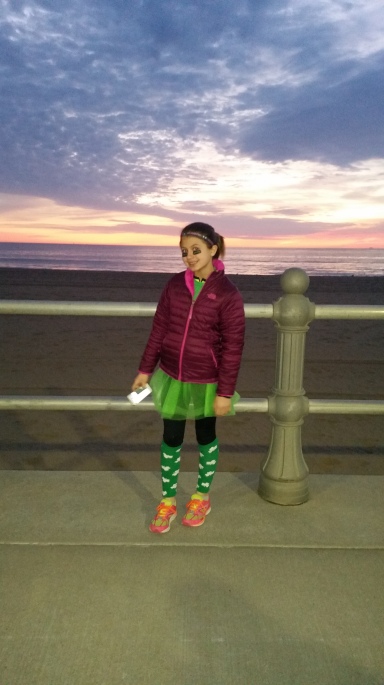 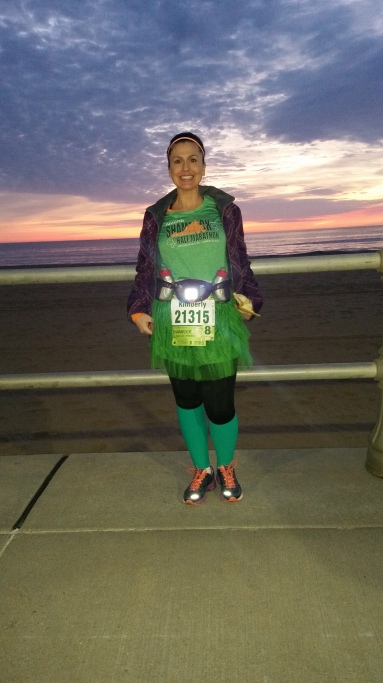 It was cold, but not as cold as I had thought it was going to be.  We headed to the start and walked around for a little bit. 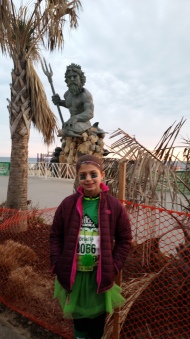 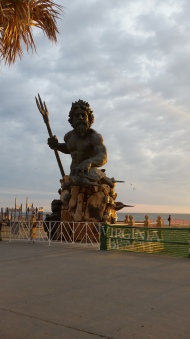 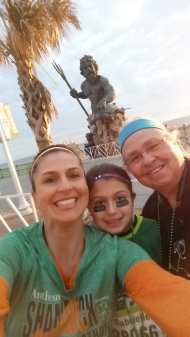 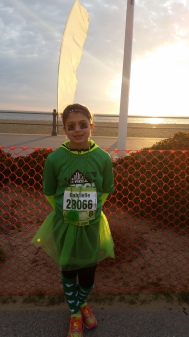 Then we decided to check our coats.  Brrrr.  We saw Sam and then we headed to the starting corrals while she went off looking for Kevin and Lilee.  Gabby and I were in corral 8 so we wished my mom good luck and she headed back to corral 14.  We saw the Lent gang and took some pictures with them before the start. 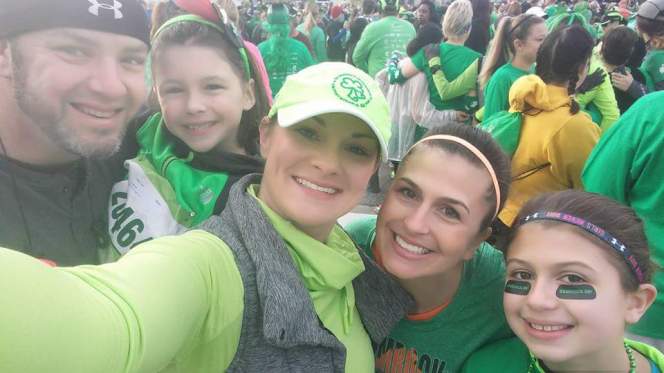 They headed back to corral 14 as well because they knew Lilee would be doing a lot of walking.  A corral started every 2 minutes so it was 7:59 before corral 8 starting running. 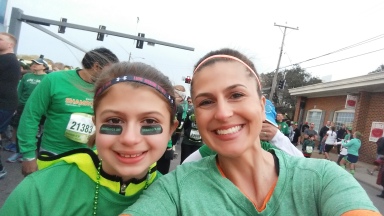 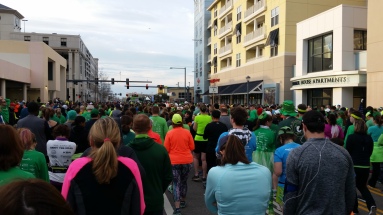 Going into this, I wasn’t sure what to expect.  I had told Gabby I would let her set the pace and if she needed to alternate running and walking, it was fine with me.  The farthest she had ever ran was a 5k and she hasn’t been running much lately, with the exception of her dry lands conditioning she does with her swim team a couple of times a week.

We saw Bart Yasso at the start of the line wishing everyone well and off we went!  We started at a pretty good pace.  We were running around 10:30-10:45 and Gabby said she was feeling pretty good.  Around mile .5, she noticed Steven, Makayla, and Nat on the sidewalk.  Steven and Makayla had gotten up and walked down to pick up Nat at her hotel so they could cheer us on!  It was nice seeing them early in the race! 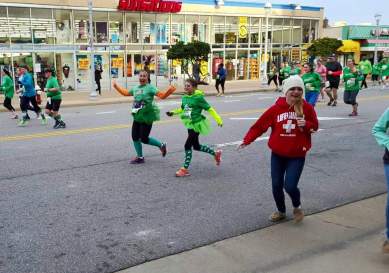 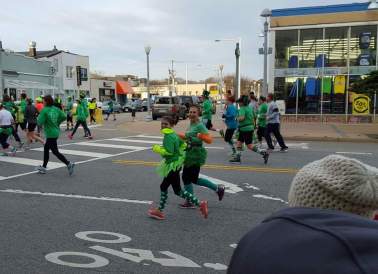 Seeing your family really pumps you up!  Gabby seemed to be running a pretty consistent pace (she is definitely much better than I am at pacing).  We continued South down Atlantic Avenue until around mile 2, where we looped around to the boardwalk and started heading north.  As we rounded the corner, we ran smack dab into the wind!!  And boy was it strong!!  It didn’t stop Gabby though.  I would ask her if she was alright every now and then, but she was great.  We took turns reading some of the motivational signs that J&A had set up for us.  When we got to mile 3, Gabby said she wanted to walk for a minute.  I was very impressed that she made it that far.  She walked, while drinking some water and by 3.10, she was ready to run again.  Just before mile 4, we headed back out to Atlantic Avenue, but continued running North.  The wind was HORRIBLE!!  A little after 4.5, we turned back on the boardwalk and headed South to the King Neptune statue and finish line!  Gabby finished so strong!!!  I was so proud of her!!!

Unfortunately, we never saw Steven, Makayla, or Nat at the end, but they were there in the freezing cold!   As soon as Gabby and I stopped running, we realized just how cold it was.  We collected our medals and some snack/drinks and headed over to find them at the finish line. 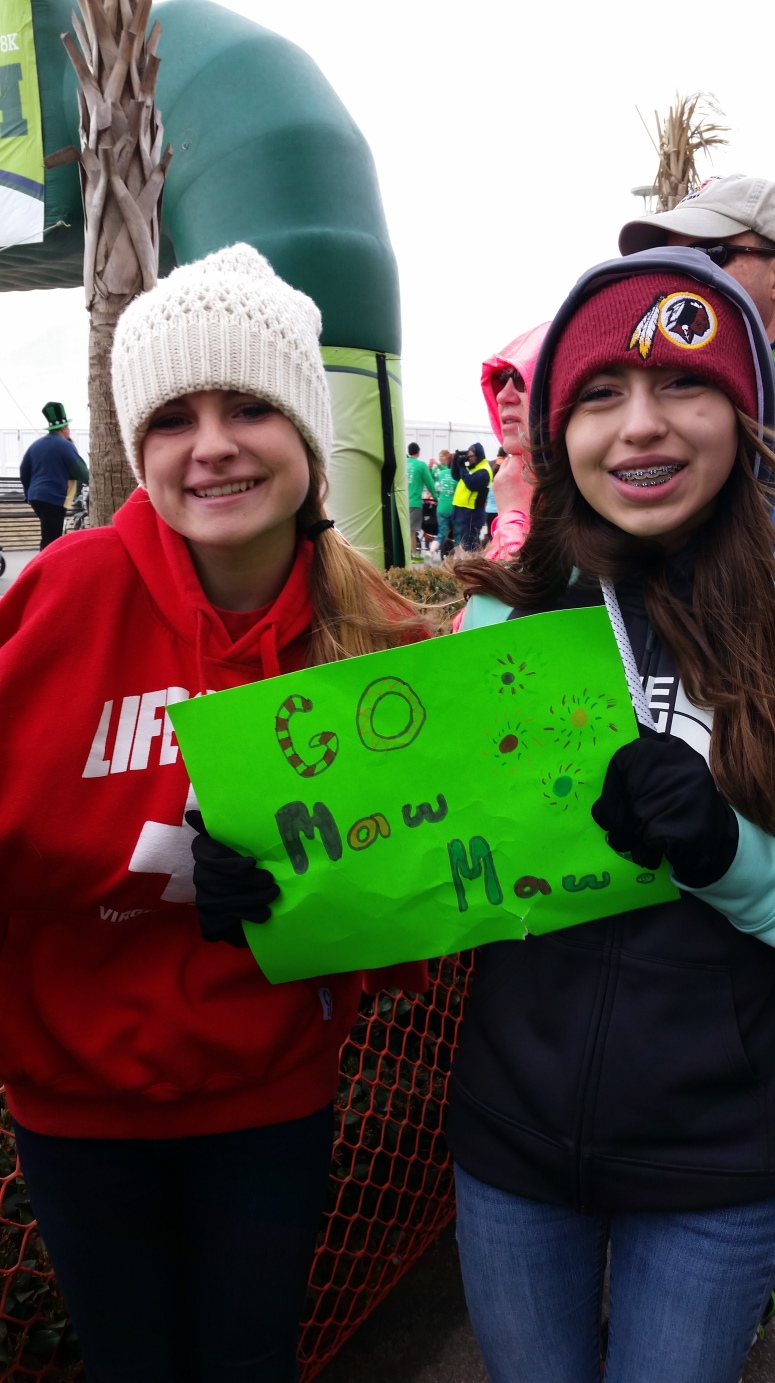 They were freezing so I told Steven to take Makayla and Natalee to the huge tent while we waited for my mom.  Gabby really wanted to see her finish.  Again, it was FREEZING, but worth it to see her finish!  Way to go Maw Maw! 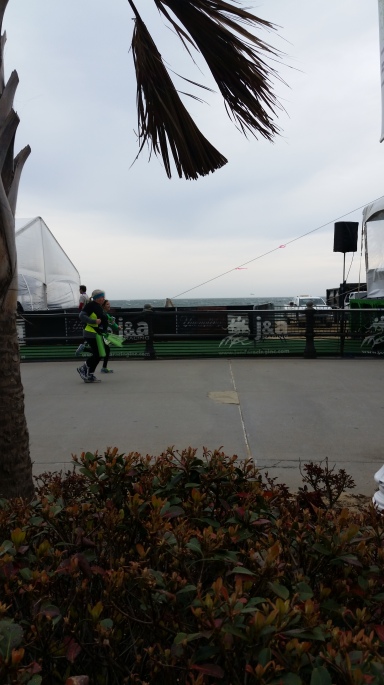 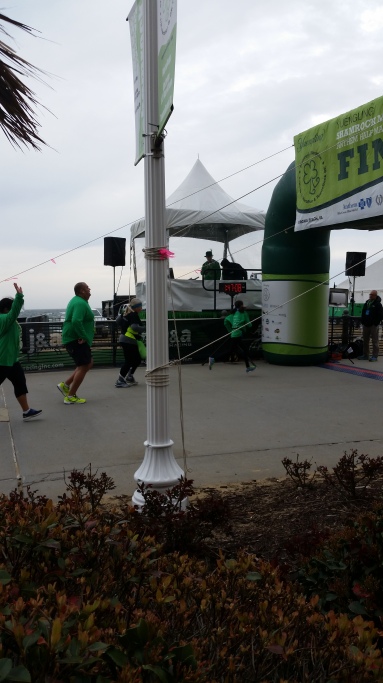 We all headed to the tent but then found out that Lilee, Sam, and Kevin were almost done so we headed back to find them and spotted them just after they finished!  Way to go Lents!  We all headed to the tent together.  We stopped on the way for Gabby to ring the PR bell (it was her first 8k, so an automatic PR) and some pictures with the sand sculpture. 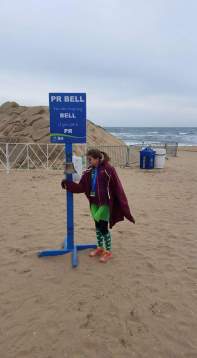 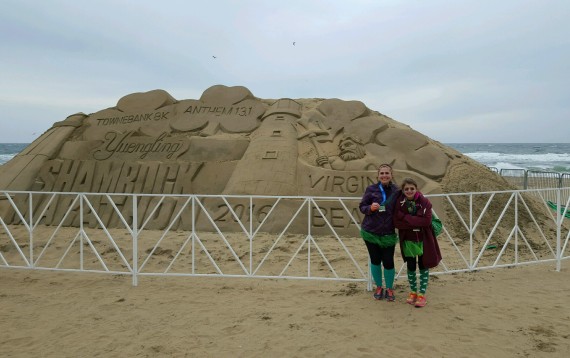 Then we hit the tent.  My mom had gotten some beer, but it was a little too crowded for my liking.  We ended up leaving on a quest to the Pancake joint we had eaten at last year.  We walked a good 10 blocks to find it, only to be told it would be at least an hour and 20 minutes.  Luckily, we found a breakfast buffet a few blocks back that could seat us immediately.  SCORE!  We were all cold and hungry!  We enjoyed our food while rehashing the race (and the tow truck incident).  Good food with good people!  Afterwards, we headed back to the hotel to shower and rest.

I plan to hit the expo again this afternoon so that I can buy some gloves and something to put over my ears tomorrow.  Its supposed to be just as cold and windy (actually a little colder), but on top of that, there is a good chance of rain.  I definitely need to be better prepared than I was today.  Although, the conditions during the actual race weren’t nearly as bad as they were after we finished.  I know Steven and Sam are feeling a little uneasy about running 26.2 in this weather, but I know they can do it!!  I am really looking forward to tomorrow.  I have been so excited about their marathon that I haven’t really stopped to think about my half marathon and what my plan is.  Its very unusual that I don’t have some sort of plan/goal in my head, but I honestly don’t this time.  I mean, sure I would love to finish in under 2:15 or at least 2:20, but I am just going to listen to my body and see what happens.  I know this wont be a PR for me, but I am okay with that and I CAN’T WAIT to see what Steven and Sam can do!!!