This was my second year running the GW Parkway Classic 10 Miler.  I loved it just as much this year as I did last year.  I absolutely love the course.  While it is tough due to the rolling hills, the scenic views of the Potomac River more than make up for it.  I’ve also lucked out with the weather both years and that can really make a huge difference.  I also set a 10 Mile PR!!!  The race is super organized; they even give you your snacks (lots of them) in a neat little snack pack box at the end of the race.  They also provide free pictures.  And not just any pictures, they are really good quality pictures.  I’m still waiting to see mine.  I’m hoping they managed to take at least one of me where I don’t look like I’m about to pass out (like usual).  UPDATE: Since writing this blog, they have uploaded their photos and I was a bit disappointed that there were NO professional race photos of Steven, Kevin, or myself.  Only one at the end after the race.  There were a bajillion pictures of the elite runners and not a single one of us.  Bummer!

Last year, (girl) Sam and I ran this race together.  I was really hoping to run it again with her this year, but unfortunately her schedule just didn’t work out.  I had already been trying to talk Steven into doing it with me and when he found out Sam couldn’t make it, he agreed.  We were technically on “vacation” already.  We were planning to leave for Disney/Universal the Monday after the trip so I figured it would be a nice way to kick-off our vacation.  We decided to invite Kevin and (boy) Sam with us as well.

Since this is a point to point race and there is no parking at the race start, we had to drive into Alexandria and catch a shuttle to the start, which was at Mount Vernon.  We left our house at 5 am and had no issues getting to the parking garage.  I ate my oatmeal in the car and then we headed to the line to get on the shuttles.  The line was pretty long and was moving slowly, but we were finally able to jump on a bus (the nice buses that even have “nice” bathrooms).

We made our way down the GW Parkway to the start of the race.  Kevin even made a comment about how it was pretty flat.  It’s funny how deceiving that can be.  What seems flat in a vehicle can be completely different on foot.  After making our way to the start of the race, we made a stop at the port-a-pots and then checked our bag.  We then made our way over to the start.  I just want to mention that the race was also providing heat sheets at the START of the race because it was chilly, which I thought was really nice.  I also heard they had food and beverages but we never made it over to that area.  After one last picture, I split up with the fellas at this point.  I am slower than they are.  They decided to start further up so I wished them good luck and fell in with the 10:00 – 10:59 crowd.

The race started promptly at 8:00 and within a few minutes, I was crossing the start line.  I started my Garmin, Map my Run, and turned on my music.  I remembered that most of the first mile was downhill.  Unfortunately, I think I started too far back.  I definitely felt like I needed to be running faster, but it was pretty crowded throughout that first mile.  By the end of mile 1, I was starting to feel like I was in my groove.  I couldn’t resist checking my watch often and was pleasantly surprised at my pace.  To be honest, I had a good feeling going into the race that I would PR, but I didn’t want to set my expectations too high because I knew there were lots of hills.  I had a couple of good runs leading up to the race though and my current 10 Mile PR was 1:41:48 (10:11 pace) that I set at the Cherry Blossom 10 Miler.  I have been feeling a lot stronger lately, so I was really hoping I would beat that at this race.

I don’t remember a lot of details about this race.  The hills just kept coming and we had a nice view of the Potomac.  It all started to all look the same and while some may find it boring, I really enjoyed it.  It was really peaceful and that is not a word I would use to describe many races.  I did have my music playing to keep me pumped up though.  There is not much crowd support on the course so if you rely on the crowd to pump you up, this may not be a good race for you.  I do remember feeling nauseous and actually dry heaving a little bit around mile 4 (sorry…I know that’s TMI).  I was planning to take my second GU around mile 4.5 – 5 (I had taken one 15 minutes prior to starting), but I knew that my stomach was not going to be able to handle it so I had to skip it.  Around mile 8 was when the fatigue really started to set in and I wished I would have been able to handle the other GU.  I ended up having to walk, but just for about a tenth of a mile.  I picked it back up to a run and headed up the hill that leads to Old Town Alexandria.  I noticed the walkway to the Woodrow Wilson Bridge as I passed it and started feeling thankful that I was “only” running the 10 miler (I ran the Woodrow Wilson Bridge half marathon in 2014, which also runs along the GW Parkway and into Old Town but then turns you around and leads you over the WW Bridge).  I continued through Alexandria and then we made a right hand turn.  Mile Marker 9 was on a STEEP (but quick) little hill.  I made it most of the way up but then took my 2nd walk break (again, wondering if the GU would have made a difference).  I made my way towards the finish line and I have to admit that the last mile was VERY HARD for me.  I kept talking myself out of walking.  I tried to make a deal with myself that I would walk for a tenth of a mile and then sprint to the end to make up for the walk.  But I was able to talk myself out of it (partly because I wasn’t sure if I would be seeing the fellas and I didn’t want them to see me walking).  I never did see them and FINALLY, I was crossing the finish line!!  I knew I had a PR!  Woot Woot!  My official time was 1:37:13 (9:44 pace).  I also found out that at my 5 mile split, my pace was 9:45, so I was happy to see I actually finished the last 5 miles slightly faster than my first 5 (even with walking twice in the 2nd half).

I collected a water and my medal and then saw the guys off to the side past the finish line.  They all did great!!  It was the first 10 mile race for each of them so they each earned a PR 🙂  I collected my snack pack and we all headed to the finish festival, which was a little difficult because of the huge crowd trying to fit through a pretty narrow section of fence.  We headed down to the water to take a few pictures and get ourselves situated. 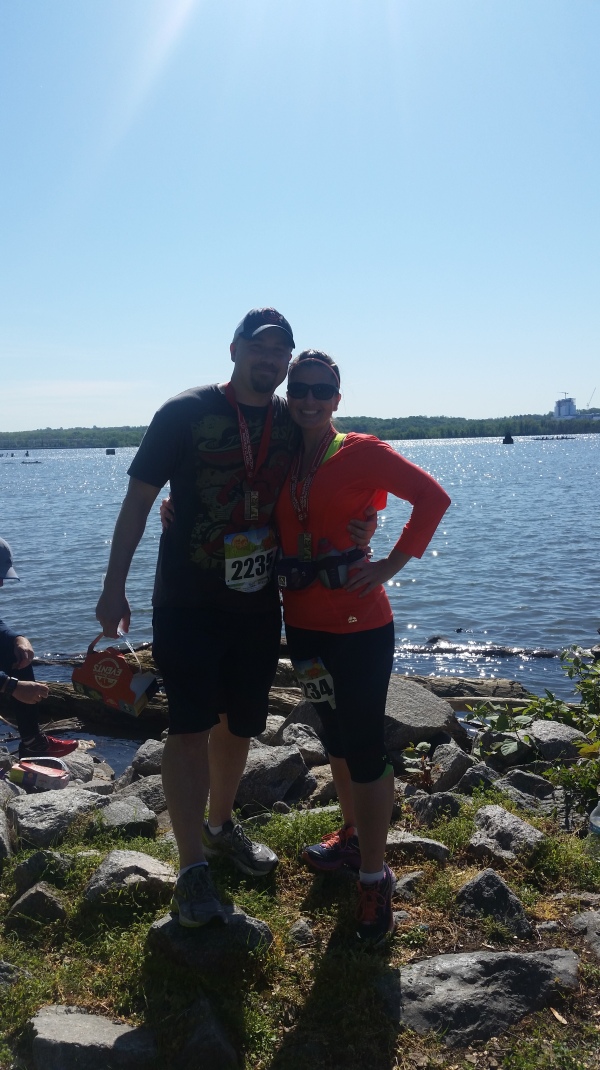 We were going to go grab a beer, but the line was ridiculously long.  We decided just to get going because we all had things we wanted to get done that day (I still had to pack for our trip and we had to fit in the last Harry Potter movie since we’ve had a marathon to get us in the mood for Universal).  I do wish we could have stayed longer.  The weather was gorgeous and the atmosphere was perfect for hanging out post-race.

We walked back to the van and were headed home before 10:30.  We stopped at Chili’s in Waldorf for lunch on the way home.  That seems to be my go-to place after a race (and sometimes the night before).  We were home by 1:00, which left us plenty of time to get everything done for vacation. 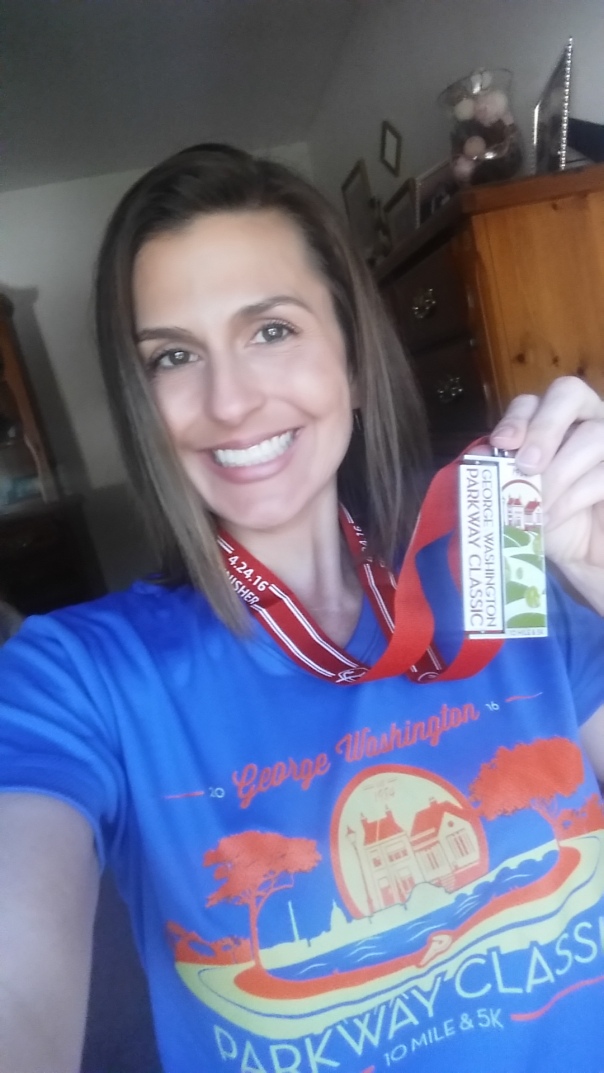