This was the 2nd year that I wasn’t planning to run the 10k Across the Bay, but ended up running it.  I was supposed to have plans this weekend.  When those plans fell through and my weekend opened up, I started thinking about signing up.  I asked Makayla and Gabby if they would want to join me.  Makayla didn’t want to, but Gabby said she would do it again so I registered us both.  Later that week, Natalee and I decided to pitch in to register Sam as a birthday surprise, although I had to tell her about it to make sure she would want to do it ;o)

Since Sam and I were both off on Friday, we drove up to the Navy Stadium to pick up our bibs.  We picked up our bibs, bought a parking pass, and picked up our t-shirts.  We didn’t stay at the expo long as neither of us really needed anything.  We both bought some GU’s and then decided to head down the road.  We stopped for lunch and since the weather was absolutely gorgeous, we decided to sit outside and enjoy our food. 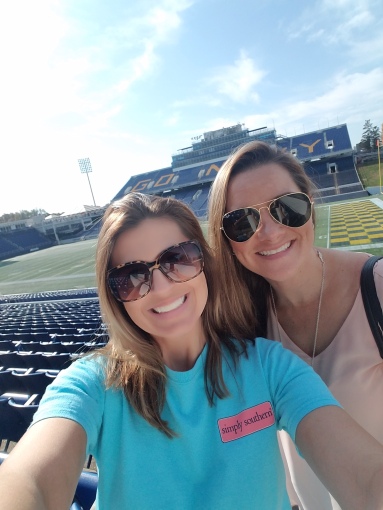 We decided on Saturday evening that we would leave at 5:00 a.m.  We weren’t assigned a wave.  Our bibs said “Choose” so we decided to try to get there early.  While I don’t generally enjoy having Daylight Savings Time come to an end, I did enjoy it before the race!  An extra hour of sleep was nice, but 4:30 still came way too early.  Gabby and I got ourselves together and met Sam outside around 5:00.  We had decided to park at the Anne Arundel Fair Grounds again since we had a good experience there last year.  By the time we hit the port-a-pots and got to the race, it was just before the start of Wave 3 so we figured we would take a few pics and jump in Wave 4.  They staged the corrals a little differently this year so we got in line for what we thought was wave 4, but ended up being wave 5. 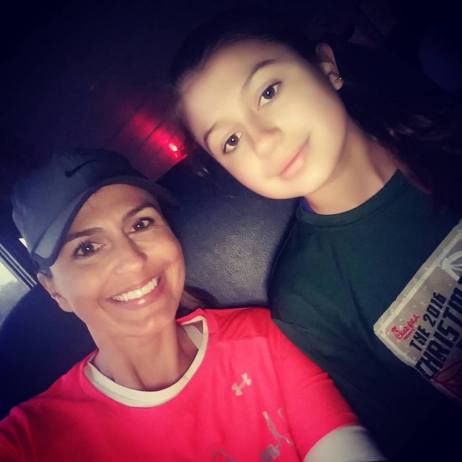 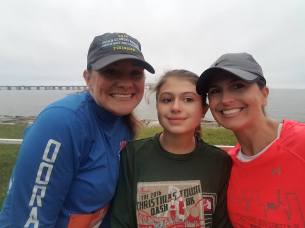 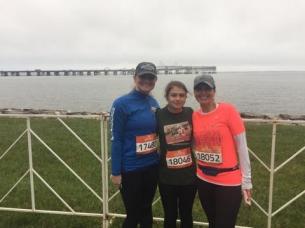 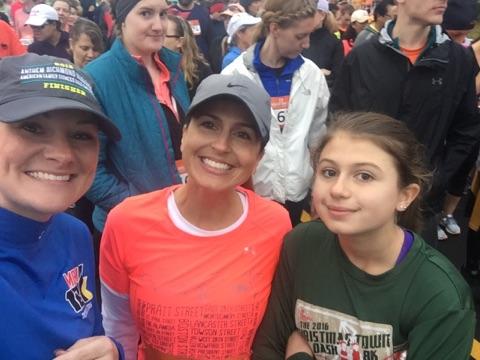 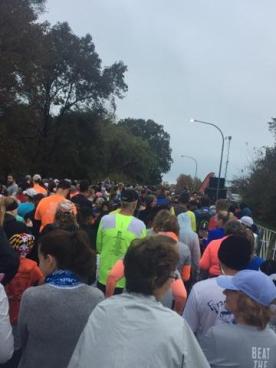 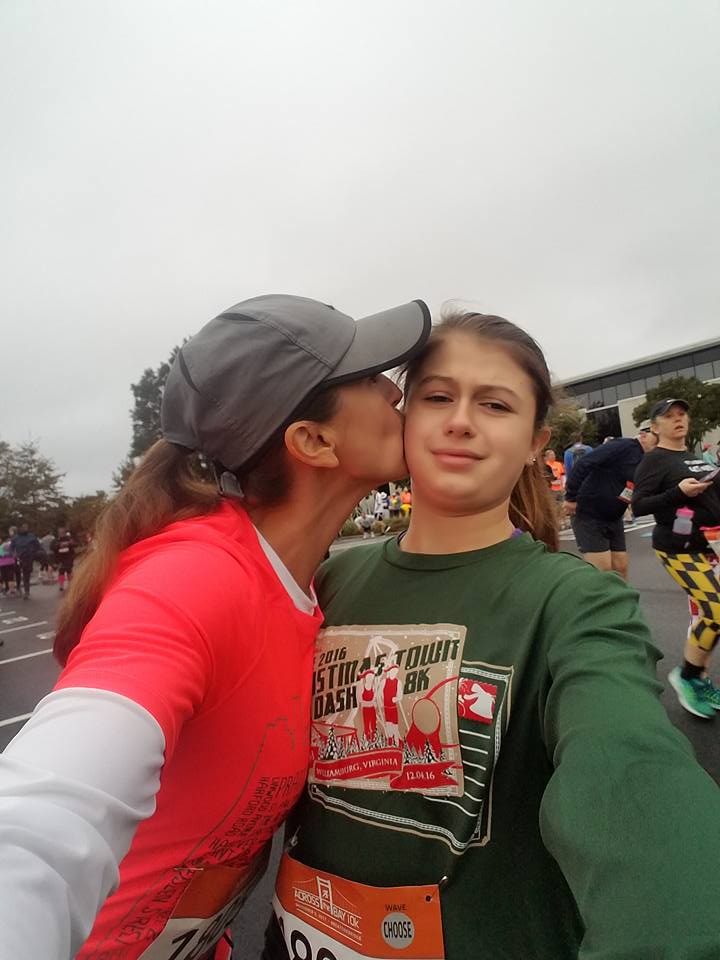 At 8:00, our wave started and we were off.  I noticed that there were a LOT of bibs around me that had later waves on them, which was a little disappointing.  I know this is a huge race and probably very difficult to control, but it makes it REALLY hard to get into a good rhythm in a race when you spend the better part of the first mile weaving around walkers.  I’m all for walkers and people of all abilities running races; it’s just hard when they are all starting at the same time.  Sam, Gabby, and I were finally able to settle into a good pace.  We continued together for about a mile and a half.  We were all a little over-dressed.  I had on a lightweight long sleeve shirt with a t-shirt overtop; Sam had on a thicker long sleeve shirt, with a tank underneath; and Gabby had on a lightweight long sleeve shirt.  This was good for the chilly start of the race (around 58 degrees), but once we started running, we heated up pretty fast.  Luckily, the sun wasn’t out or it would have been much worse.  Sam decided to slow down so that she could take off her top layer.  Gabby and I continued on. 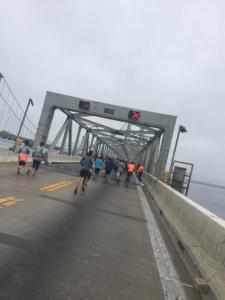 The uphill portion of the bridge is so tough!  Gabby hadn’t really “ran” in a LONG time.  She runs occasionally for the drylands portion of her swim practice, but hasn’t really done any distance running in a while so I really didn’t know what to expect from her.  I told her if she was feeling good, she could go ahead and leave me behind, but if she needed to walk, I would walk with her.  Let me just say that I was SO impressed. 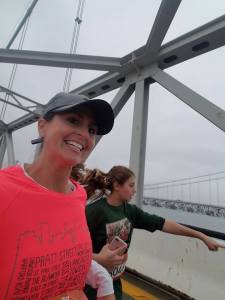 She said she was going to stop at mile 3 and then quickly changed her mind when we got to the mile marker.  Somewhere on the downhill portion of the bridge, Sam caught back up to us and then pulled ahead.  At mile marker 4, we did walk and I decided to try my new Marshmallow GU.  As soon as I pulled it out and opened it, Gabby had started running again!  Woah…quick walk break.  Gabby and I continued on.  For me, the mileage after the bridge is always the toughest part, mentally.  You kind of feel like you should be done, but you know you have over a mile to go (and that includes a couple of inclines).

We dug deep and kept running.  We caught up to Sam with less than a half a mile to go.  We all rounded the final turn together and then Gabby took off in a full sprint.  I tried to catch her and when she saw I was gaining on her, she really picked it up.  I was cracking up at her competitive drive.  I sure as heck couldn’t catch her!  She beat me by 2 seconds – lol!

Here are our splits according to Map My Run: 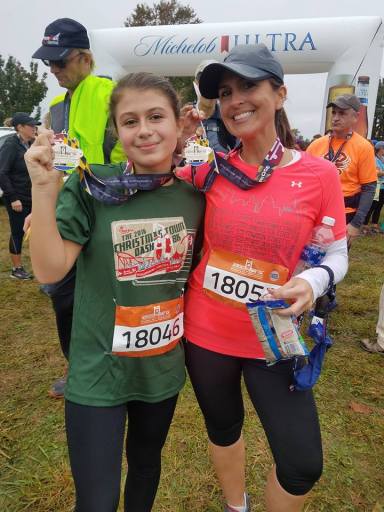 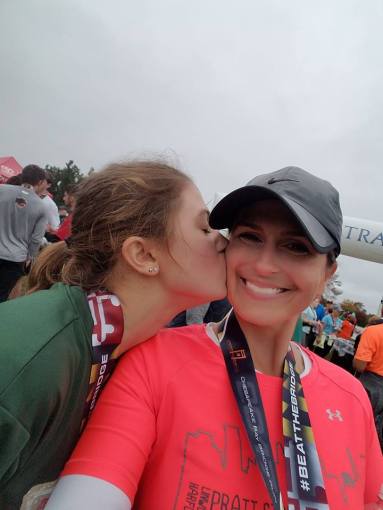 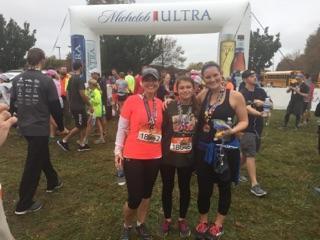 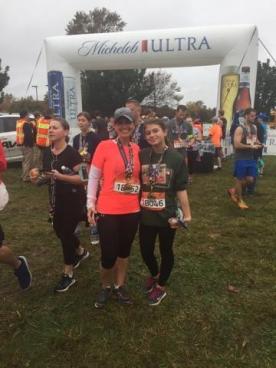 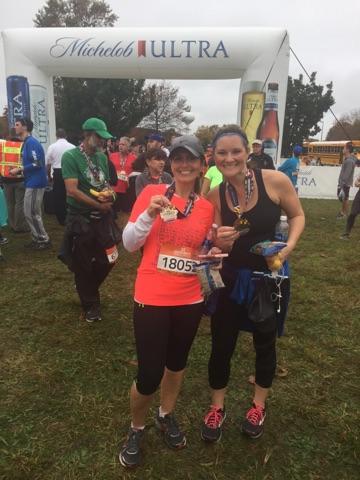 We collected our finisher medals, water, and some snacks and headed to the finish festival.  Unfortunately, the ground was wet and muddy so hanging out didn’t seem very appealing.  We decided to head out relatively early.  We stopped at Applebee’s on the way home for lunch and were home by 2:00.