Well this week was a little tough when it came to working out. My hip was sore after last Sunday’s run so I decided to take it easy.

Since Monday was a holiday, the yoga class at the gym was cancelled. I decided to spend some time in the pool with Gabby. Although it wasn’t an official workout, I had fun and probably managed to burn some calories while doing so. On Tuesday, my hip was still sore. I was supposed to run 4.5 miles, but I was a little nervous about hurting myself. I decided to try out my new treadmill. That way if it was hurting too bad, I could jump off.  I only ran 1 mile, followed by 1/2 mile walk. My hip was pretty sore and I was worried I was just injuring it more. I iced it for a little while afterwards. 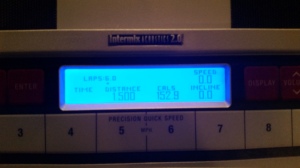 On Wednesday, I decided to skip Body Pump and give my hip the day off since it was still bothering me. I was starting to convince myself that it could be a serious injury and started worrying about my upcoming race. My new hydration vest came in the mail, so I was really wanting to test it out, but I knew better. On Thursday, I was supposed to run 4 miles, but since Friday was my day off, I decided to give my hip one more day off.

On Friday morning, Sam and I met up at 7:30 to run our 4 miler. My hip was a little tender for the first mile, but I stopped noticing it after the first mile. We ran at a pretty good pace. I was a little surprised, considering I hadn’t really gotten a run in since Sunday. I also got to try out my new hydration vest. I really liked it. It is the 2 liter Nathan Moxy Hydration Vest. I love that it holds plenty of water (probably more than I will ever need) and it has pouches for my phone and any other fuel I want to bring. It also has a roomy zippered pouch on the back that I could use if I needed to. And I love the color!! I thought the sloshing of the water would bother me, but I didn’t really notice it too much. So far, I love it! 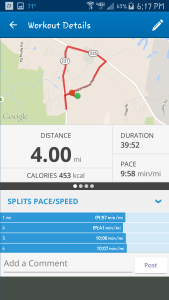 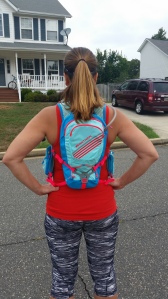 After our run, Steven and I went to the doctors for his foot. It has been bothering him really bad for a while and although his new running shoes have helped tremendously, he is still dealing with some pain. Just as we thought, he was diagnosed with Plantar Fasciitis. He was told not to run for about a month, and given stretches to do 3 times a day. Anyone who knows Steven knows that he is not going to listen to the doctor’s advice though 😉

Afterwards, Steven took Makayla to the movies and I took Gabby to Sweet Frog with Sam and her girls. Gabby wanted to go to bed early because she had a big day ahead of her on Saturday.

I didn’t go to Body Pump on Saturday morning because Gabby had her first open swim meet!! We got up a little after 5:00 on Saturday morning and got ourselves together to head to Annapolis. Grammy met us at the house and we all headed up the road together. I had been very apprehensive about signing her up for the meet, but her coach had assured me that she was ready for it. She had to swim ½ mile and I knew she was capable of swimming that far, but was worried because it was out in the Bay. Besides worrying about sharks, sea nettles, and bacterial infections, I was also worried about what she would do if she needed a rest. There would be no wall like there is at the pools. I had watched videos on youtube of previous year’s videos and I wasn’t too worried about the waves because the Bay was very calm in the videos. Well as soon as we pulled up, I noticed how choppy the water was and how big the waves were (there was a storm brewing) and instantly started panicking. Steven and I were very nervous but Gabby stayed cool, calm, and collected. If she was nervous, she never showed any signs of it. She got her number written on her, her swim cap, and her timing chip and we headed down to the beach. She applied the jellyfish repellent/sunscreen that her coach provided and started warming up in the water. 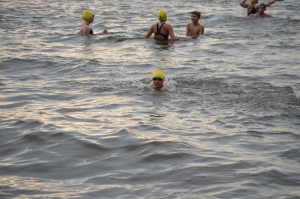 At 8:00, they briefed the 10 and under swimmers and shortly after, they blew the air horn to signal the beginning of the race. There were 25 kids in her age group. They all took off running and diving into the water. Makayla was cracking up and thought they looked like minions with their yellow swim caps (she was right). I quickly lost track of Gabby and started freaking out a bit. Steven had binoculars but was also freaking out, trying to find her. Makayla assured us that Gabby is an awesome swimmer and to calm down. It was a very stressful 23ish minutes. I was uneasy until I was sure it was my kid that I saw finishing the race. Her and another girl had stayed together the entire race and finished together. 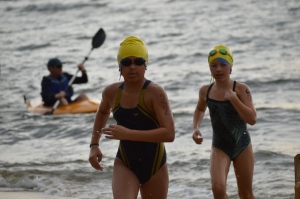 I was so happy for her and she LOVED it!  She says it was really difficult at some points and she thought “What did I get myself into” but she never thought about quitting. We were so proud of her!! I would have never done anything like that at her age (or probably any age). After a few pictures, the 11-12 year olds were all set to start, but they ended up postponing the race. Within another minute or two, it started POURING! We headed for the shelter, along with all the other participants so we ended up pretty soaked. I was hoping to watch some of the other races, but after Gabby’s shower we decided to head home. Last I heard was that they had postponed the rest of the race by 2 hours and were going to make a call later in the day. I’m not sure if they were able to finish or not. We headed home and I had a lazy afternoon/evening.

On Sunday morning, Sam and I went on base around 8:00 to run the 10 mile loop!! I ate a yogurt for breakfast and we hit the road. I ate a shot block energy gel on the way and before we knew it, we were starting our first mile. The weather was beautiful this morning. The temps were in the 60’s and it was overcast. I was actually a bit chilly before we started, but it was perfect running weather. I had a bit of hip pain for the first half mile or so, but after getting into a groove, it felt more sore than painful. We had decided we would stick to a 10:45ish minute pace today, but we ended up running a bit faster. I felt pretty good for the first 6 miles. Around mile 6, I started feeling tired. I told myself (and Sam) that all we had left was a 4 miler, just like the weekdays, but it didn’t really help make me feel any better. I pulled out my other energy gel and slowly ate it over the next 1.5 miles. I probably should have ate it around mile 5, BEFORE I felt bad but it’s always a little hard to predict exactly *when* you are going to hit your wall. I think next week, I will start eating at mile 5. Although the last 4 miles were tough, I was able to maintain a pretty decent pace and finish it out. 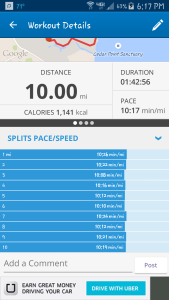 Sam and I managed to take a few pictures while we were running today. This is what I imagine I look like during my runs:

10 miles was a big milestone for us in our training.  I am feeling much better about my hip and my ability to run our half marathon in 3 weeks!  After our race, we headed home and I got cleaned up for FOOTBALL SUNDAY! Woot woot! We had invited some people over for some food, fun, and football. The Redskins ended up losing (what else is new?), but we still enjoyed our day with some great family and friends (and food). 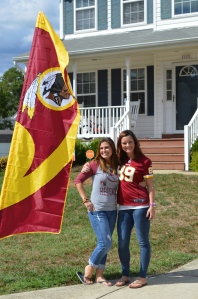 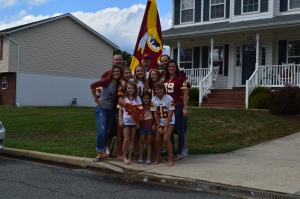 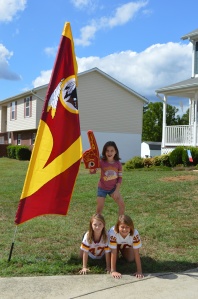 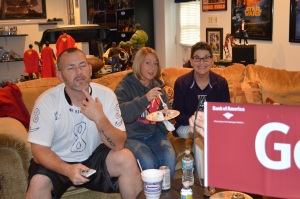 QOTD: Do you watch the NFL? Do you do anything special to start the season?