Sam and I had signed up for this race weekend back in July while we were on vacation. I had heard from a runner friend who ran it last year that it was a great race. J&A racing also put on the Shamrock half marathon that we ran back in March, so I already knew from experience that they know how to put on a good event. We signed up for the Shell Yeah challenge, which consisted of a 5k on Saturday and a half marathon on Sunday.

Sam and I started our training in July and were all set to go for the weekend of October 3rd. Unfortunately, Mother Nature had other plans. A few days before the race, they decided to postpone the race due to the threat of Hurricane Joaquin. I totally understood their decision, but it was still a bummer grande. Luckily, the event was able to be rescheduled 2 weeks later.

If you missed Part 1 of my recap, you can find it here. Below is the recap of the half marathon.

Sam and I had set our alarms for 6:00 a.m. on Sunday morning. I actually got out of bed around 6:20 to start getting ready. We got ready, French braided each other’s hair, and ate our yogurts we had purchased from the grocery store. The hotel was offering another “grab & go” breakfast, so we did swing by for coffee (for her) and a banana (for me) before we left. It was so cold outside! It definitely put a hustle in our step and got us over to the convention center quickly. Again, they opened the convention center so we had a place to stay warm and a REAL bathroom. Such a nice perk! We checked our post-race bags and then headed into the convention to stay warm for another 10 minutes and eat my shot bloc. With under 10 minutes until race time, we headed back out to find a spot in corral 4. We lined up near the 2:15 pacers, but knew we wanted to stay ahead of them. 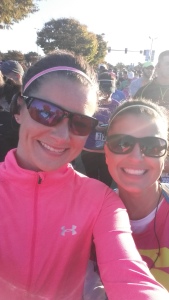 Mile 1 – For the first mile, we were doing a bit of weaving in and around people. We were trying to settle into a good pace, but it took us about ½ mile to really settle in. We had to cross an overpass, which meant a bit of hill, but once we got over that, the route was pretty fast. We checked our garmins at mile 1 and were pleasantly surprised at our first mile split.

Mile 2 – 3.5 – The next couple of miles were pretty boring. We stayed beside each other, but unlike our usual runs where we chat the whole time, we each had our earbuds in and were trying to conserve energy by not talking. We would take them out every now and then to talk strategy and check on each other. Our miles were still pretty consistent. I was starting to get worried that I was pushing too hard for the beginning of the race. My goal pace was 9:45.

Mile 3.5 – 5 – Around mile 3.5, the course started becoming more interesting. Miles 3.5 – 5 were through downtown Hampton, which was a beautiful little town that I really enjoyed running through. We were still keeping a pretty consistent pace.

Mile 8 – 9 – At mile 7, we reached the waterfront. It was SUCH a beautiful stretch of the race. There was a water stop coming up around mile 7, where I decided that I needed a Gatorade. I decided to walk through the water stop. Sam was feeling great so she decided to keep going. Go Sam Go! After my Gatorade, I started running again. I wish I would have snagged a picture; it was so beautiful. When I got to mile marker 8, I decided to take another walk break. I had gone back to my cycle of running too fast and then needing a quick recovery walk. I did the same thing at the mile 9 marker. I was still happy with my pace at that point and I knew I had some time in the bank, so no worries.

Mile 10 – 11- Somewhere between mile 9 and 10, the route got boring again. I give J&A Racing credit, they really did *try* to make it more interesting by posting crab jokes on signs on the side of the road. Why did the mermaid wear seashells? Because she grew out of her B-shells. Pwahahaha. There were lots of these jokes along the route (they were there for the 5k yesterday too, but I think I forgot to mention that in my recap). I started feeling tired during this portion of the race. This was also where the wind seemed to pick up. Luckily, the wind wasn’t nearly as bad as I thought it would be on this race. There were definitely a couple of sections that were tough, but nothing like I was expecting. I give credit to our training runs at Pax River. I was still taking a walk break at each mile marker, but I was trying to make up for it when I would run again. I wasn’t feeling any pain anywhere, but was just exhausted and I knew that I would struggle for the remainder of the race. I was starting to worry a bit.

Mile 12 – 13.1 – I did a lot of mental math in my head at this point. I was trying to figure out if I was going to break 2:10. Honestly, part of me really didn’t care at that time. That’s when the mental battle begins. I so badly wanted to walk the remainder of the race. I told myself that running is dumb and I will never do it again (yeah right). But then I would dig deep and run harder. It seemed like we only crossed one overpass on the way out, but I swear we had to run at least 3 on the way back. No extreme hills, but enough to be irritating. When I turned the corner and reached mile 13, I gave it everything I had. I thought I was going to be extremely close to 2:10, but wasn’t sure if I made it or not. I heard Sam yell my name at the finish line and tried to give her a smile and continue pushing as hard as I could! 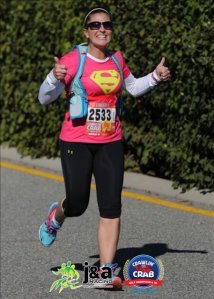 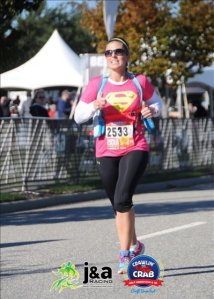 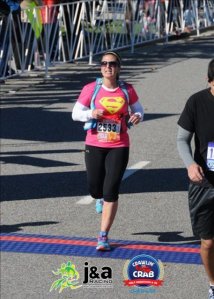 I collected my half marathon medal, water, Gatorade, snacks, bonus finisher’s item (Crawlin’ Crab hat), and my Shell Yeah Challenge medal!! I met Sam and we congratulated each other on our PRs!! Sam did ABSOLUTELY AMAZING. Her previous PR was 2:18 and some change. She came in at just over 2:04 this time!! Major PR!!! I am so happy for her. We have both come a long way since our running journeys began.

We collected our bags and headed over to the Finishers Festival. I had signed Steven up to get text alerts with my time so he had already texted me to congratulate me. I also received the sweetest text from Makayla that made my heart sing.

The first thing we did was RING THE PR BELL!! Woot Woot! They also had a chalkboard that we could write our PR times on. I loved those little touches! 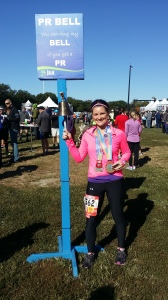 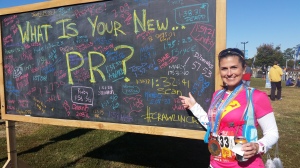 Next we went to the massage/stretching station and we rolled out our muscles a bit. They had 2 different massage tools that I LOVED! I have to get me one of each one day! 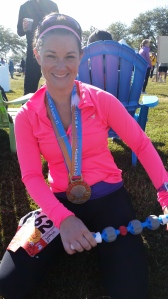 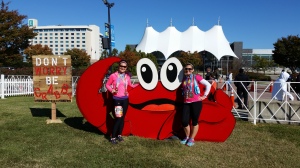 Next we headed over to collect our beer and Corn and Crab Chowder in the bread bowl. Today, we chose Angry Orchard since we knew this was a beer we both liked. Mmmm. They were giving out 4 free beers to each runner today, but there was no way I could handle that much beer at 10:30 in the morning after running 13.1 miles. Let’s be real for a minute. I couldn’t even handle that much beer at 10:00 on a Friday night anymore. I’ll just take one, thank you very much 🙂 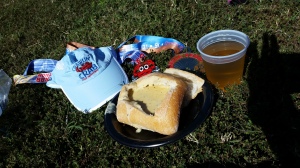 We were supposed to check out of the hotel by noon so we weren’t able to stay much longer. We walked back to the hotel. After showering and packing the rest of our stuff, we were on the road by 12:30.

We were home just a bit before 4:00 and now I have 3 medals and a bunch of other swag to add to my collection! 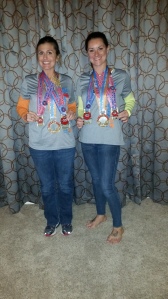 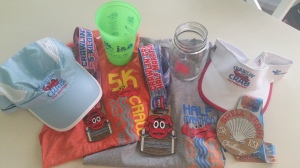 All in all, Crawlin’ Crab ranks up there as one of my favorite races!  It was definitely worth the wait!!