I had a great weekend in Hampton, VA last weekend, where I participated in the Crawlin’ Crab Shell Yeah Challenge for the second year in a row.  I REALLY enjoyed this race last year.  The weather had been perfect, I had a fantastic weekend with my bestie, and I got a PR!!  I just had to run it again!  Click here to read last year’s recap.

I will recap the 5k and the rest of the weekend later this week, but first I wanted to recap the half marathon.  Spoiler Alert – This year’s race was NOTHING like last year!  While I enjoyed the weekend away with family, the race itself was pretty brutal.

The race started at 8:00 and our hotel was within walking distance so I set my alarm for 6:30.  I actually fell asleep pretty early the night before and slept well so I actually woke up before my alarm even went off.  I got ready and headed downstairs to heat up the oatmeal I had made in advance.  My mom and cousins had run the 5k the day before, but decided to stay an extra night to cheer me on during my half marathon!!  How awesome is that?  So, after eating breakfast, my mom and I headed over to the convention center.  I should note that the hotel provided another “grab and go” breakfast for the half marathon participants, which I thought was really nice.  I just wish they would have advertised it a little better.  My mom happened to be walking by a meeting room and spotted the bags of breakfast items (they used a different room than they did last year and didn’t mention it at check-in).

We arrived at the convention center by 7:35, where I was able to use the clean restrooms instead of having to use the port-a-potties (which they also had plenty of).  Paul and Missy walked over to join us, which I thought was really nice since they didn’t *have* to get up early that day and then we all met up with Kevin, who was also running the half marathon.  After chatting for a little bit, we headed to our corrals (3 for me, 2 for him).  I have to give the start line announcer a lot of credit.  He was really good at keeping the crowd entertained and even offered some great advice (start slow and then taper – lol).  Before long, it was time for the National Anthem and then we were off.  It was a wave start, with corrals starting every 90 seconds so that the course wouldn’t get too crowded.  And so pretty soon, it was time for Corral 3 to start!!

I knew my family would be near the start line so as soon as I started, I was looking for them!  I found them before they found me and was waving my arms around and yelling like a lunatic.  They were all cheering me on!!  That was very much appreciated!

The only hill is at the beginning/end of the race (overpass).  After crossing the overpass, I settled into a pretty decent pace for the first couple of miles.

I was feeling overheated already and had worked up a pretty heavy sweat!  It was so hot and humid.  I knew by around mile 2 that I was going to have to take my first walk break earlier than I had planned.  At 2.5 miles, the walk breaks began!

Miles 3.5 – 5 were through downtown Hampton, which is a beautiful little town.  Not only was it a welcome change of scenery, but there was more crowd support during this part of the course.  It was at this point of the race that my music stopped working.  I’m not sure why I can run training run after training run and never experience problems with my music, yet every time I race, my phone becomes possessed!!  A song would play for about 5 seconds and then start all over again.  Or sometimes it would skip around, but only play the first 5 seconds of each song.  So aggravating!  I took my phone out of my hydration vest and messed with it a little, but I decided not to waste too much energy on it and finally just turned it off.  The course had DJ music set up throughout the course (no bands this year), and there were some nice cheering sections, so I figured I’d just suck it up and run without music (gasp).  I also ate some sports beans around mile 4.

During miles 5 – 7, we were headed towards the beautiful Chesapeake Avenue so the thought of the upcoming change of scenery kept me going.  It was during this portion of the race that the 2:15 pace group caught up to me.  Hmmm…I figured I’d be able to hang with them so no worries at this point.  I was also happy to cross the 10k (6.2 mile) timing mat.  At that point, my overall pace was 10:12.

Miles 7 – 9 were along Chesapeake Avenue.  I had hoped this water front portion would provide a nice cool breeze, but no such luck.  While the scenery was gorgeous, I was still feeling really overheated.  I took more walk breaks than I should have and even decided to “Go Live” on facebook a couple of times.  It was really nice to have people rooting for me via social media.  I would like to use this option more often in the future.  The pace group passed me for the last time during this portion of the race and I knew I wouldn’t be able to catch them again.

During miles 9 – 11, the internal battle continued.  I exchanged some texts with Steven and my mom.  I am usually the positive one so you know s**t is getting serious when I’m being the Negative Nancy.

I was still struggling a lot and was considering just walking back to the start.  They tried motivating me (my mom even told me they had 3 musketeers waiting for me at the finish, which I had told her the day before that I was craving).  I also had to stop to take off my shoe to remove a pebble at one point.  I also ate some more sports beans.

I remember looking at my watch at the 2 hour, 8 minute mark on my Garmin.  This time last year I was finishing and this year I was only at mile 11.75.

I made my final turn and only had about .10 left to run.  This is always deceiving because you feel like you are so close, yet it seems to take forever to get to the finish line.  I reminded myself not to push too hard (I *almost* had a vomit incident at the finish line at yesterday’s 5k) but I did pick up the pace a bit.  I frantically searched for my family and found them cheering me on and waving chocolate at me – lol!  Its so nice to see familiar faces cheering you on when you feel like you just want to collapse.  I crossed the finish line with a total time of 2:24:57 (11:04 average pace). 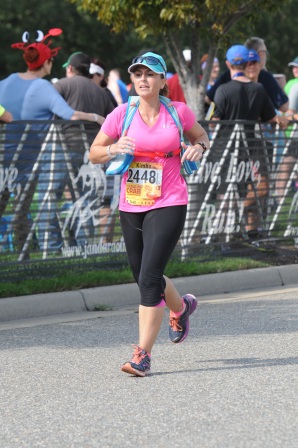 I grabbed a water, Gatorade, and my half marathon medal and stopped for a photo.  Then I grabbed some snacks and my Shell Yeah Challenge medal (for completing both the 5k and the half marathon).  I LOVE this year’s medals!  They are top notch.  I grabbed another photo with both medals (my 5k medal was at the room)!

I found a spot in the grass in the shade to cool down for a minute.  I was completely drenched in sweat.  I’ve only run one other race where the heat and humidity affected me so much (Superhero Half Marathon).  I would DEFINITELY prefer running in the cold!

I found Kevin, where we both griped a little about our races.  Apparently, he didn’t have the race he wanted either.  I was telling him how I had just run 11 miles the week before and had felt so much better during that training run when a lady approached us and told us to be happy we made it across the finish line.  She was a pacer and she fainted.  She said she was around mile 6 and started feeling bad and the next thing she knew she was laying down and people were snapping in her face.  She was taken to the finish in a truck.  Thank goodness she was okay!  It gave me a little perspective…Kevin and I both FINISHED and that’s all that matters!  Kevin didn’t stay long so I didn’t even get the chance to get a picture with him.

My family found me soon afterwards and although J&A puts on a heck of a finish festival (soup, although no bread bowl this year, AND 4 free craft beers for each runner), I just wasn’t feeling it.  I was overheated and just wanted to take a shower and go home.  We made a quick loop and I took a picture with the crab before heading back to the hotel.

Don’t worry your sweet little hearts though, we did stay for a little bit after the 5k on Saturday and my mom and I did enjoy a beer together then.  I’ll recap that race soon 🙂  After showering, we hit the road and I was home by a little after 4 (had to listen to the Redskins game on the radio this week). 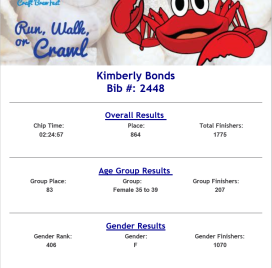 I haven’t run since the race.  I was planning to run a 3 miler tonight but decided to watch Gabby at swim practice and write this recap instead.  I thought it might help sort out my feelings about running.  I have been really doubting my desire to continue long distance races over the past couple of days.  I will definitely continue running and continue signing up for local shorter races, but I might take a break from the distance running.  Time will tell!

Thank you all for reading!