Happy Hump Day!  We are officially half way through the week and Friday is on the horizon.  It can’t get here fast enough.  The workouts I had planned for the week haven’t quite gone as planned so far.  Being a control freak/OCD type person means I like to stick to a schedule.  Make a plan and stick with it.  I have been working on becoming more flexible though and I think I did well this week.

Ah, back to the grind.  After a long day at work, my sister offered to take my girls to the carnival.  Thanks, Aunt Becky!  So…the plan was to go to yoga and possibly swim, but with a free night with the hubby after a very busy weekend, we decided that dinner at Outback would be much better.  And it was 🙂  I missed my yoga class, but we decided to still get a bit of exercise in by making 2 loops around the neighborhood (2 miles) when we got home.  For having short legs, I tend to walk pretty fast.  Steven always says I should just jog at that pace.  He hates my fast walks!  But that makes me feel like I got a good workout.  It all counts!!!  I don’t have any pictures to go with Monday, so I’m going to just leave this right here.  I’m sure I’ll blog about Flash a lot in the future even though he really, really, really doesn’t like exercise.

So another day that didn’t go as planned.  I wanted to get my 4 mile run in today.  After work, I picked Makayla up from the house and then picked Lilee up from daycare.  I am watching her for Sam while she is on travel.  After picking up Lilee, we headed straight to Gabby’s swim meet.  It was the last regular swim meet of the season so Gabby had a lot of support.  Pappy, Maw Maw, and Pop Pop all showed up to watch her swim.  She did great again!  I haven’t seen all of her official results yet, but I do know she came in 4th in backstroke.  She also swam IM (Individual Medley), butterfly, and a freestyle relay.  In between events, Gabby and Lilee seem to have found my cell phone camera. 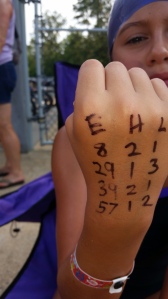 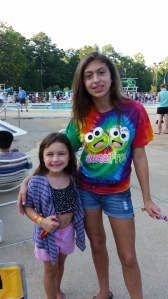 After swim, I decided not to go to the gym.  Tuesday became my rest day, so I will just change up the rest of my schedule.

Today was supposed to be a body pump day, but I knew I had to get my 4 miles in so I decided to pass.  Instead I came home and made ziti and got caught up on some laundry (Riveting, I know) while waiting for my dinner to settle.  Around 7:30, I decided to head out for my run.  Steven and I briefly talked about running together, but Steven was craving a fast run.  I can beat him in a “mall/speed walking” race any day of the week, but when it comes to running, like Hall & Oates said, “No can do”.  I am just not as fast as him.  So we decided to go our own ways (Like Fleetwood Mac said).  I haven’t run outside in 10 days and I knew my route had hills, so I didn’t think it would be a very good run.  The weather was pretty decent though, with the temperature around 80ish degrees and the humidity around 40ish percent.  I missed having a running partner, but I just plugged in my ear buds and ran.  The first mile and a half felt really good.  Then came the nice down hill.  And on this particular route, what first goes down, comes right back up.  I’m not going to lie, the uphill was tough.  Shortly after the hill, I reached the 2 mile turn around point and headed back home.  Overall, I was very happy with my run tonight! 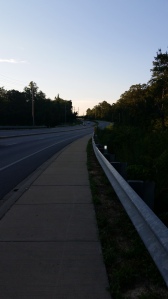 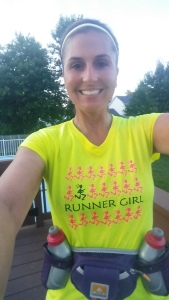 Since I didn’t have a running partner tonight, I had to rely on good music to get me through.  I haven’t had a chance to download new songs lately, but here is what came on during my run tonight (At the time, I thought I had selected “random”, but realized while typing this up that they are in alphabetical order, so not so “random”)

Question of the day – What is your favorite song to workout to?

2 thoughts on “What goes down, must come up?”