Happy Sunday!  I hope you all had a good weekend.  Mine was pretty good, but I have experienced some running highs and lows and of course I am going to share them with you.

Friday was my rest day.  While I didn’t work out, it was today that I had my “runner’s high”.  A couple of months ago, when I was trying to plan out my 2016 runs, I noticed that the Cherry Blossom 10-miler was open for registration.  I mentioned it to Sam and Crystal and we all decided to register.  Unfortunately, this has become such a huge race that not everyone is guaranteed entry.  After the registration period is over, runners are selected via a lottery system.  Crystal and I did not get in.  Sam did.  Bummer!!  Crystal told me that all of her other running friends got in as well.  I had mentioned that I was still very interested if she knew of anyone who changes their mind.  So today, while at work, I got word that a lady Crystal knows was looking for someone to transfer her bib too!  Crystal isn’t quite ready to commit, so she passed on it, and was offering it to me!!  Yay, I was so excited!!  By the end of the evening, I had already met up with the lady to pay her and we had already completed the transfer online!  Yay!!  Now I am all registered for the Cherry Blossom 10 miler!  I am really excited about that!!  Sometimes things just have a way of working themselves out and now Sam and I can run it together.

On Saturday, Sam and I went to body pump.  I am not a big fan of the newest release (weird beats and quick transitions) so I was happy that we were mostly doing older tracks that I really like.  I was feeling pretty good, but was a little disappointed when the instructor decided to call me out on my weights and told me I should use heavier weights.  Yep, that happened.  Now in her defense, I am sure she probably didn’t notice that I missed 3 months and probably still thinks of me as I “regular”, but it was still frustrating.  I am already upset that I have lost a lot of strength and that I had to decrease my weights when I came back, but I had a plan to get back to where I was (I think I even mentioned in my last blog that I was going to increase my weight next week).  I really didn’t need her to call me out (not once, but twice).  Oh well.  I am probably just being overly sensitive.  I don’t like feeling weak and I don’t like being made to feel like I am just slacking.

Saturday afternoon, Steven went of his long marathon training run.  He ran 18 miles!  I was so proud of him!!  I saw him around mile 12/13 and he was feeling pretty miserable.  I thought he would be hot and offered him a t-shirt, but he said he was cold.  He said he ended up getting a second wind during the last couple of miles so he was feeling much better when he finished.

On Sunday morning, the plan was for me to meet Crystal on base at 8:30 to run 6 miles.  Unfortunately, Crystal was unable to run and so I was facing 6 lonely miles.  Sam had already left for her LONG run so I even considered where she would be and thought about trying to meet her to run 6 with her, but I couldn’t figure out how to make it work (where would I park and would I be able to loop back to my van during her route?).  I ended up just going alone.  Boo!!  I had a pretty rough run.  As much as I have been reminding Steven to fuel and hydrate properly, I have neglected to do the same for myself.  I didn’t have any GU’s or beans to bring with me.  I did have some energy bites that I had made last weekend.  I threw them in a baggie and off I went.  I was feeling a little rough from the get-go, but thought once I got to 1 mile, I would be in my groove and I would feel better.  Nope…that didn’t really happen.  I took a walk break at 1.5 miles, but for just .10.  Mentally, I was like “That’s okay, maybe that’s not so bad.  I’ll stop at 1.5, 3, and 4.5 for a quick walk break”.  Once I turned onto 235 and headed South, I realized I would be running a gradual uphill route for quite some time.  The sun was shining and I was overdressed.  I ended up taking another walk break before mile 3, but I don’t remember what the mileage was.  I thought about eating an energy bite, but my stomach was feeling a little off and I didn’t want to chance it.  I was so happy to reach mile 3 and turn around because I knew I would be running downhill for a while.   The only problem was that I was running into the wind on the way home and it was a bit chilly now that I was facing away from the sun and facing the wind.  I took another walk break of two before hitting mile 5, where I decided I would NOT allow myself to walk anymore.  I had a good last mile but fought for every step of it.  I was trying to convince myself to take one more walk break, even with .2 miles left!!!  I was so happy to be done.  I just wasn’t feeling it today.  There are so many variables that go into running that it can be hard to pinpoint WHY you had a really good or really bad run, but there are definitely some things I want to do differently next weekend for my long run.  Hopefully that one will go better than this one!! 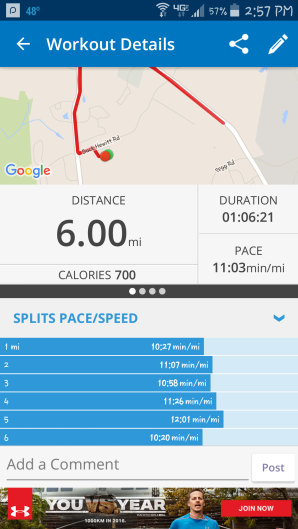 A few hours later, I was scrolling facebook and I saw a post that really hit home with me.  It is so true.  If I continue to “pay rent”, I know I will get back to where I was!! 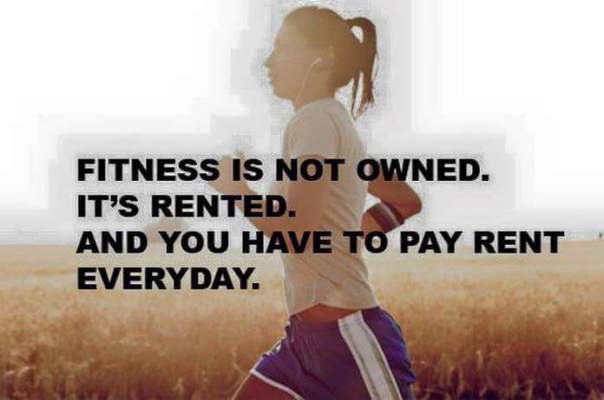 Sam finished her 18 miles strong!!  I am so happy for her to tackle yet another new distance.  Her and Stevie B are crushing it!!!   4 weeks to go!!

QOTD – Does anyone have any motivational tips or quotes that help you when you are feeling down?  Running or otherwise?

2 thoughts on “The Highs and Lows of Running”