I made some New Year’s Resolutions.  The problem is that now I think it’s considered pretty lame to make New Year’s Resolutions.  All the cool kids have just learned to accept themselves as they are and find resolutions silly.  I tried to think of something different to call them so that I didn’t sound so lame but we all know I am not that creative.  So, I’ll just call it like it is.  I made some New Year’s Resolutions.  And call me lame, but I actually like the idea of having a fresh start.  Yes, I pretty much make the same resolutions each and every year but that’s okay!  It’s like hitting the reset button.  I almost wish it were the norm to make “New Month’s Resolutions”.  Wouldn’t it be great to pause for a moment after each month and really reflect on what we want to do differently the next month??  Is that really so bad?  Plus, those who know me well know how much I like to make lists 🙂

So anyway, the resolutions have been going well so far.  I really do think that the key is preparation.  One of my resolutions was to make time for more sit-down dinners and stop resorting to fast food all the time.  A – It gives us family time to talk about our days.  B – It is generally healthier.  C – It saves money.  The challenge has always been that my husband and I both work full time.  I don’t get home until almost 5:00 each night and Gabby has to be at swim at 6:00 three nights a week and 5:30 once a week.  Do you see the problem??  So, I’ve been trying hard to stay ahead by at least a day with the meal planning.  I find that when I prepare as much as possible in advance, it really does make the evenings so much smoother!  And trying to fit my runs in during my lunch break helps free up my evenings so that I can prep the next night’s dinner or actually have some down-time every now and then.  I’ve been more successful at getting my runs in at lunch because I prepare my running clothes the night before and leave them sitting on the dining room table.

I would never have the time to pack my bag in the morning.  So I’m hoping that as long as I continue to prep ahead of time, my resolutions will be easier to keep.  What are your resolutions?  I would also love to hear any tips you have to help you stay focused on meeting your resolutions.

Sunday – 3 miles on the treadmill at 9:43 average pace.  I started a little slower and worked my way up while catching up on Scandal on Netflix.

Monday – I was off for the holiday.  Makayla, Gabby, and I decided to play Just Dance on the Wii to get some cardio in instead of yoga.  We had so much fun!  We went back to the original Just Dance.  You know the one; Ring my Bell, Womanizer, Who Let the Dogs Out.  We played long enough to work up a sweat so I’m counting it as a work-out!

Tuesday – 3 miles on the treadmill.  I actually packed my running clothes and planned to run at lunch, but I forgot about a lunch meeting that I had accepted before my long 4 day weekend.  No biggie.  I just hit the gym after work and watched another episode of Scandal while I ran on the treadmill.  I like to have something to keep my mind occupied so the miles go by faster.  I averaged a 9:52 average pace.

Wednesday – Body Pump.  I came *this* close to getting Steven to try it with me.  He ended up running while I took the class.

Thursday – I ran 3 miles outside during my lunch break so that I wouldn’t have to worry about it in the evening.  Running outside is still tough for me.  I am still trying to get used to changes in terrain and pacing myself.  I ended up having to walk 3 times and finished with an overall average pace of 10:28. 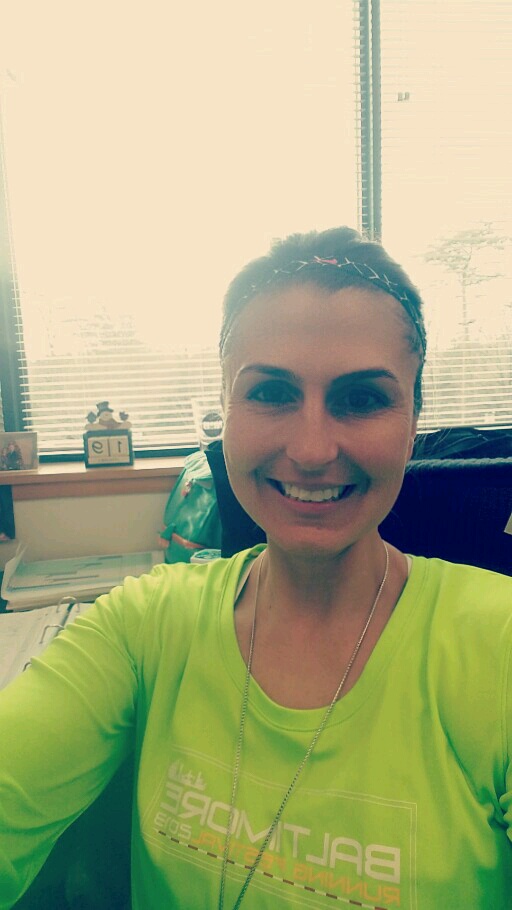 Saturday – Gabby had a swim meet so I wasn’t able to go to Body Pump.  It was dreary and misty out, but Steven and I had a long time to kill before Gabby was up to swim so we decided to take a walk around St. Mary’s College.  It really is a beautiful campus.  Plus, we got to see this tree with all the shoes wrapped around the branches (maybe some of them are even running shoes)!  I don’t see that on my normal route.

There you have it.  I had a relatively successful week of workouts.  I am still fighting the battle with nutrition.  I have definitely improved my habits (while still being a believer in “everything in moderation”), but I still have some habits I’d like to break (like evening snacking).  I’ve lost a couple of the 10 pounds I had gained this winter so I’m on the right path.  Why is it that we can gain weight so quickly, but it feels like it takes forever (and a ton of hard work) to lose it???

I hope you all had a good week!  Let me know how those New Years Resolutions are going!