Gabby and I completed our first race of 2017!!!  And BRRRRRRRRR…it was a cold one!  I raced both the 5k and the 10k last year (recap here) so I already knew that I enjoyed this race, but it was very cold last year so I wasn’t sure if I wanted to run it again.  I decided to keep an eye on the weather and sign up at the last minute based on the forecast.

Well…I waited until March 1st and the forecast was saying it would be in the 50’s!  Great!!  I talked to Gabby and she said she wanted to run it as well so I went ahead and signed us up.  Lo and Behold…the forecast changed over the next couple of days (our weather has been very unpredictable lately) and we were in for a very cold morning!!

Gabby and I made sure we had some warm clothes (trying to find as much green as possible) and laid everything out the day before to ensure a smooth race morning.  We hadn’t participated in a race since December, so I was a little paranoid that I was forgetting something.

We got up bright and early in the morning and hit the road by 6:00.

The race didn’t start until 9:00, but I wanted to ensure we had plenty of time to find parking and pick up our packets.  Gabby read some of her Ronda Rousey book on the way up the road and I think that helped to motivate her.  We were there with plenty of time to spare so we decided to hang out in the van for a little while.  We were trying to avoid the cold for as long as possible! 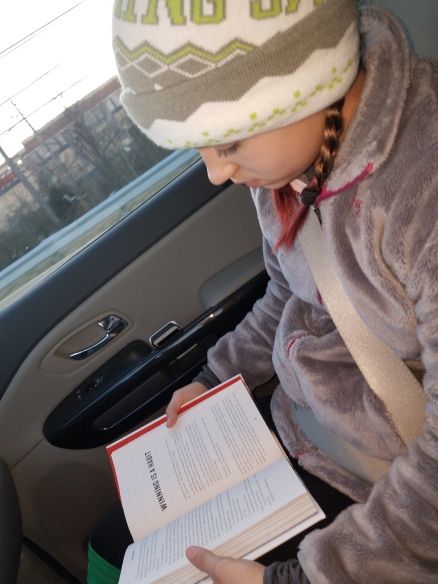 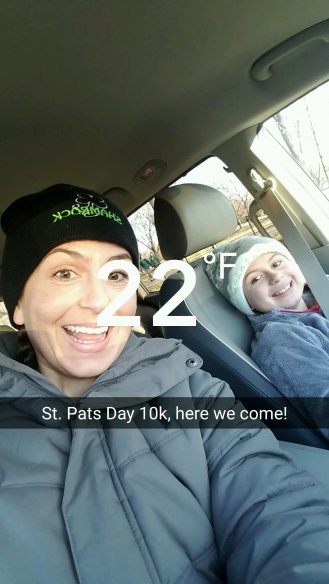 We finally decided to head towards the starting area to hit the port a pots and pick up our bibs.  After getting our bibs pinned on (difficult to do with numb fingers), we took some fun photos/videos (can you tell the Ronda Rousey book motivated Gabby?). 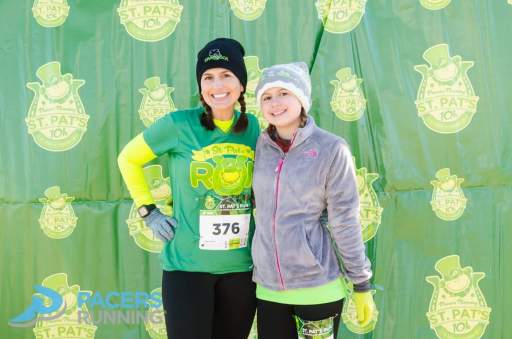 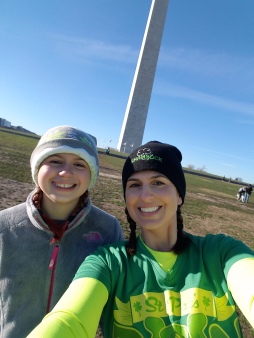 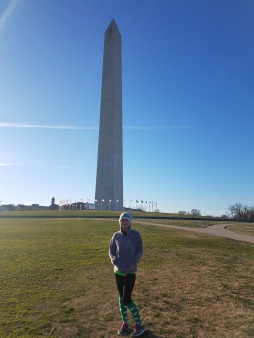 Next, we went over to the starting area to watch the start of the 5k (8:15 start time).  This race is pet friendly so it was fun seeing all the dogs.  We hung out for a while longer and talked about where we would meet back up if we got separated and then I decided to go ahead and check my coat.  Gabby was going to check hers but decided it was too cold so she kept it on.  Finally it was time for us to head to the starting line.  We lined up right around the 10:00/mile corral.

Time to run!!  I decided not to bring my earbuds since I figured I would be running with Gabby.  The first half a mile or so was a little crowded but we were easily able to run side by side.  Before we hit mile marker one, Gabby was warmed up and ready to come out of her jacket so she took it off and wrapped it around her waist.  The first couple of miles took us beyond the Lincoln Memorial and just past the Kennedy Center before turning around. 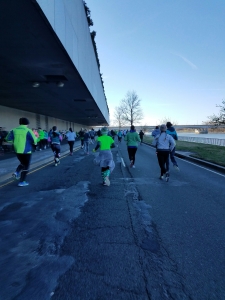 I looked at my Garmin and realized we had completed mile 2 in 9:08, which is a little fast for me.  I remember telling Gabby that I needed to slow down a bit but that she could keep going.  We headed back towards the Jefferson Memorial and then made an extra loop down Independence Avenue.  I could see Gabby just ahead of me.  Occasionally, she would take a quick walk break and I would catch up to her.  I kept her in my sights until just beyond mile 5.5.  She said she was heading towards the finish line when the announcer was saying that if you had a goal to finish the 10k in under an hour you had a minute left, and he kept counting it down from there.  She told me she really gave it her all for her last .10 of a mile!!  I could heard the announcer saying the same thing so I wasn’t too far behind her, but I knew I was going to just barely miss the 1 hour mark.  I finished my race and saw Gabby off to the side!  She beat me by 1 minute and 26 seconds.  That girl is amazing!

We got our finishers medals, water, and another picture before heading over to grab my coat and wait for the awards.  I was curious to see if Gabby would place in the race.  We didn’t see many other younger kids in the 10k so I thought she might have a chance. 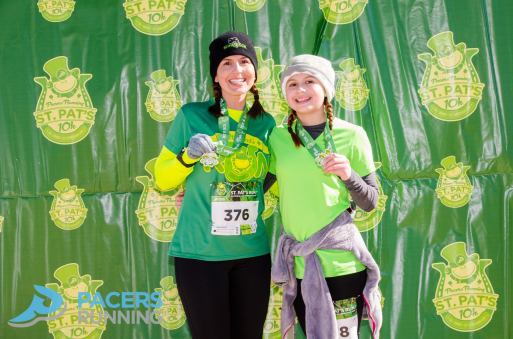 We originally contemplated walking around DC for the day, but we just wanted to get out of the cold so we headed home.

Gabby slept most of the way home.  We stopped at Panera Bread for lunch and were home by early afternoon.

I love that Pacers gives you free photos of the event!  They have posted some of them already, but I am very anxious to see the rest.  I also love the size and route of this race and would definitely do it again.  If only Mother Nature could turn up the heat a little bit for us in the future!