Once again, Sunday has come along too soon!  I had another busy weekend and have the sore muscles to prove it!

Nothing exciting to report on Friday.  We did visit Spirit Halloween store after work, so I shouldn’t say it wasn’t exciting.  Halloween is the Bonds’ favorite holiday.  Especially Stevens.  By the time we ate dinner, visited a couple of stores and dropped off/picked up Makayla from the school dance, I was ready to call it an early night.

On Saturday, I sure did get my fair share of exercise in.  I woke up feeling froggy!  I was up early enough to take Body Combat at the gym, which is the class right before Body Pump.  I used to take Combat all the time and LOVED it!!  It really makes you feel badass!  I hadn’t taken it in a couple of years though.  Partly because the schedule conflicts with my schedule and partly because I felt that Body Pump would benefit me more than Combat since I already get a lot of cardio in (my runs).  I was a little nervous about going back, but I am SOO glad I did.  I love this class.  I love punching and kicking.  Its so fun!  The best part was that the instructor announced that she was going to do some older tracks, so I actually remembered a couple of the tracks!  This is definitely a class I would love to start rotating into my schedule.  So many classes, so little time!  After combat, I stayed for my regular Saturday Pump class.  I was feeling a little worn out by the end of the class, but I’m glad I stayed.

After pump, I went home to shower and get ready for Gabby’s bday party.  I agreed to take Makayla, Gabby, and 4 of Gabby’s friends to Flight trampoline park.  The drive took us about 90 minutes and then we had a pass to jump for 90 minutes.  What a blast!!  I am a huge kid when it comes to trampolines, so I think I had just as much fun as the kids.  And believe it or not, I can still do front flips and back flips.  I was too scared to try a back handspring though!  I do have some limits!  The girls also had a blast!  And it was such a great workout!!  We were definitely worn out by the end of our jump time.  We were all ready to grab a snack and head back down the road.  When we got home, we had pizza and the girls swam in the pool for a while.  Then we had the delicious cake that Maw Maw made.  Maw Maw, Pop Pop, Grammy, and Pappy all came by to help us celebrate.  All but one of the girls spent the night.  It seemed like they all had fun! 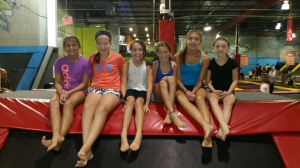 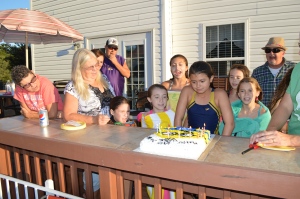 I woke up very early and very sore on Sunday morning.  Especially my arms and sides.  I assume from all the punches.  But I wanted to get my run in early, before the kids woke up.  Sam and I left the house around 6:45 and parked at the drill hall to start our Sunday long run.  We got started a little after 7:00.  We mixed up our run this week and took some different routes.  We ran some out and backs and some small loops.  It was kind of nice to change it up.  Sundays are supposed to be slow runs, but we seem to be pushing it a lot lately (without realizing it).  I’m not sure if that’s a good thing or not. 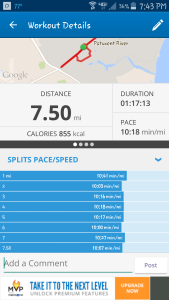 It was nice to be done relatively early.  I stopped at the donut store to bring some donuts home to the girls 🙂  After showering, I spent a lot of the day being lazy.  I did some Sunday chores, watched an episode of Scandal on Netflix, took a nap, and then went out to buy Gabby’s bday presents.  Her actual Bday is tomorrow and we’ll celebrate with dinner out somewhere.  I’m still feeling pretty sore so I’m looking forward to taking the night off tomorrow to celebrate her bday!!

All in all, we had a fun filled weekend!  Looking forward to a 3 day weekend next week.  Just gotta get through the next 4 days 🙂